You guys might have noticed that I’m a big fan of salads as main dishes, especially during the 10°C-and-above time of the year. So, of course, I’m always on the lookout for new and exciting combinations of ingredients to be used in a salady kind of context. When you’re skimming salad options on restaurant menus, in cookbooks or during shows on TV, you can’t help but notice the ever-present named classics – Waldorf, Caesar and the rest of the gang – and tip your hat to whoever invented them, since they’re still alive, kicking and delicious.

One of these classics, however, has been a bit of a thorn in my side – The Salade Nicoise. Greens, eggs, tomatoes, anchovies or tuna, olives, peppers, the occasional potato or bean, olive oil… what’s not to love? Well, whenever I’m facing a Nicoise on the menu on a night out, I actually have to remind myself of the simple fact that I’m not a fan of canned tuna – which is used over the traditional marinated fresh anchovies in most cases. Been there, done that… nope. One fine day in my kitchen, I found myself developing some serious cravings for the general idea of a Salade Nicoise and decided to do something about that, and fast. When I hit the seafoody part, I had to take a mental step back though – on second thought, my plan to use raw tuna wouldn’t work all that well with the punchy olives I had at the ready. Leaving out the salty punch wasn’t an option either, what would the eggs think? Well… as these things tend to go, with one thought leading to another and a well-stocked pantry in easy reach, I suddenly realized that I had flipped the whole concept onto the opposite side of the globe within a minute flat, all of the signature ingredients changed into their asian-leaning-towards-japanese counterparts or fitting substitutes neatly lined up in small bowls in front of me. Admittedly, I wasn’t all that sure it would work out, but in the end, this twist on the classic has become one of our spring “classics” since that first brainfrenzy-induced experiment. Here’s what you need for 2 servings of a somewhat bastardized salad classic~!
On that note… Dear Nicoise Traditionalists and fellow connoisseurs of Japanese cuisine, I humbly apologize for the somewhat reckless make-over of this classic dish… being naughty and breaking the rules in this case turned out to be way too delicious to feel bad about it though~!

1) Spread the potato slices out on a cooling rack and sprinkle them with a pinch of salt. Leave them to sweat out some of their excess moisture for about 15 mins, then pat them dry with a paper towel.
2) Meanwhile, bring a pot of lightly salted water to a rapid boid. Add the quails eggs and turn the heat down to medium. Keep them in the water for 3 mins for a waxy lava-centered egg or 5 mins for a firmer yolk.
3) Alternatively, get ready to prep mini sunny-side ups.
4) Pop the sugar snaps in with the eggs for 2 mins and dump the lot into a bowl filled with very cold water to stop the cooking process.
5) To make shelling the eggs easier, tap them against the rim of the bowl to break the shells – don’t remove them right away, though. Slide them back into the water – the water will seep beneath the shells while the inside is cooling down, making the shelling-process very easy once you’re ready to plate up.
6) While the eggs and peas are cooling down, place a heavy-based pan on high heat and arrange the potato slices inside in one layer.
7) Drizzle them with the oil and fry them for about 4 mins. Flip them over once they’re nicely golden-brown on the first side and keep them in the pan for a tan on the second side for about 3 mins.
8) Arrange them on another paper towel and sprinkle them with a hint of togarashi.
9) Add the soy sauce and sugar to a mixing bowl and have at it with a whisk until the sugar has dissolved.
10) Place the tuna cubes in the marinade, add another sprinkle of togarashi and, if you’re using them, roasted sesame seeds, and gently turn the cubes over until they’re glossed over with the spiced liquid. Set the bowl aside and move on to the dressing~

1) Add everything to a blender jug or stick-blender-friendly container.
2) Blitz the lot into a silky-smooth dressing.
3) Ta~dah!

Assembling the Dish
1) Peel the eggs, and strain the peas through a sieve, giving it a hearty shake to loose any excess water. If you want to make extra sure your dressing won’t be watered down, put a paper towel to good use on the veg~
2) Divide the leaves, peas, tomatoes, eggs and plums onto two plates.
3) Drizzle the piles with the dressing and evenly sprinkle them with the nori ribbons.
4) Dot the leafy beds with the crispy potato slices and marinated tuna cubes. If there’s a bit of marinade left in the bowl, give the cubes another drizzle once they’re nestled into the leaves.
5) Sprinkle the lot with coriander leaves and the optional fried onions, if you’re using them. 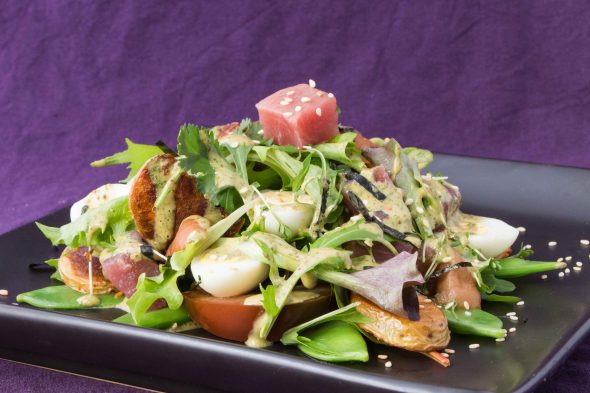