There’s no way to talk about summery foods without giving some extra attention to ice creams~! So, as a finishing touch to my Beat the Heat Special, I simply have to share one of the most refreshing and, sticking to the quick-fix requirement for the occasion, speediest frozen yummies in my summery collection with you guys today~!

Some of you might wonder how on earth lychees, of all prickly things, have made their way into a “speedy” recipe, what with their odd skins and annoying pits in the center. Well, this one usually makes an appearance during multiple-course winter feasts in our house as a palate-cleanser between two dishes rather than as a dessert at the end – for those occasions, I always go through the ordeal of dealing with fresh lychees, broken nails and sore fingertips included. The most obvious reason for this is simply: lychees are in season when it’s close to or past Christmas over here. Summer after Summer I’ve been mourning that fact, wishing these wonderfully refreshing morsels would be around when you could really need a truckload of them, and I had long given up on trying to find an edible preserve after several run-ins with sweet but otherwise taste-free lychee-shaped wet sponges. That is, until I went to the obvious source for such things after having an absolutely divine lychee dessert at our favorite Thai restaurant: the shopkeep of my usual Asian Grocery Store. The lady bustled off at my inquiry and returned with a large tin of lychees. “No sugar. Sugar makes them soggy. This is what restaurants use.” And right she was! Lychees, preserved in their own juice and nothing else. Score! Lychees during Summer! I still stick to the fresh ones when they’re available since they’re more intense in flavor, but if the need arises, like today, I don’t think twice about grabbing one of those preserves. Long story short: Here’s my Lychee & Lime Sorbet – which works with both fresh and tinned lychees~ 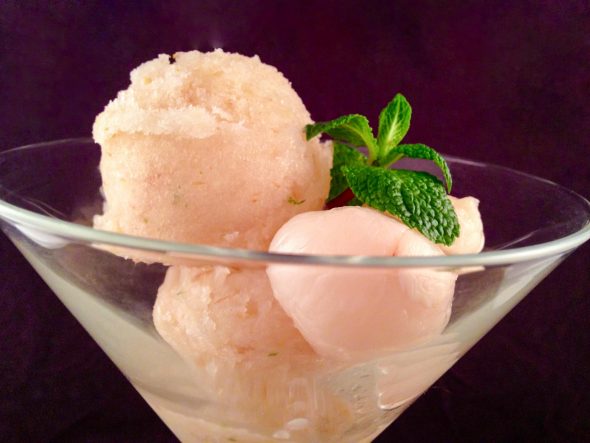 The Lychee & Lime Sorbet
400g Lychees, skinned and pitted – if you’re using tinned lychees, make sure they’re not preserved in a heavily sugared syrup, and have a taste of them before you use them. Quality and taste varies a lot, like in any other storebought fruit preserve.
2 Limes, Zest and Juice
150ml Water – or, for an extra-boost in the lychee-department, lychee juice
100g Fine Caster Sugar
2 Tbsp Liquid Glucose

1) Whizz the lychees and the lime bits into a smooth purée with the help of your trusty blender.
2) Tip the purée into a bowl. Cover it with clingfilm and pop it into the fridge for the time being.
3) Set a small pot onto medium heat and add the water and sugar.
4) Stir the mixture until the sugar has dissolved, then turn the heat up a notch and bring it up to a gentle boil.
5) Once the liquid is merrily bubbling away, leave it to it for 5 mins, then take the pot off the heat and stir in the glucose until it’s well incorporated.
6) Set the pot aside and leave the syrup to cool off.
7) Once both parts of the sorbet are entirely cooled off, blend them together and tip them into your ice cream maker – should you have one. If that’s the case, your job is done apart from a bit of thumb-twiddling downtime before moving the finished sorbet into a freezer-proof container.
8) If you don’t have a magic ice-cream gizmo, pour the mixture into a wide, freezer-proof container, pop it into the freezer for 2 hrs, then start whisking the mixture every 30 mins for the next 3-4 hrs until it gets too hard to whisk. That way you’ll break up the freezing water from crystallizing into large clumps, making sure you’ll be serving a deliciously smooth sorbet instead of a coarsely-grained granita – unless that’s what you’re aiming for.
9) You can fill them into popsicle molds after your last round of breaking up the crystals or simply leave the sorbet in its container and tackle it with an ice cream scoop when the time to dig in has come~