Sometimes, turning on the TV can be a real challenge – in terms of controlling the urge to throw the silly thing out of the window. I suppose everybody gets the feeling that there’s about 97368287 different channels and theres actually nothing on, especially on weekends for some bizarre reason. Add the instant-claws-out reflex I have when there’s over-hyped “trends” involved to the short fuse concerning that particular TV-problem and… yep that’s me walking out the door with a boiling thundercloud above my head in tow, en route to one of our city’s gardens for a breather.

Going for an extended walk in a Mood has some serious benefits as I have noticed quite a number of times in recent years. Mainly, once the foul mood in my system has been replaced with fresh air, there’s squeaky clean room in my headspace for really good ideas all of a sudden – ideas that might even shine a positive light on whatever ruffled my feathers in the first place. Today’s dish was the result of one such walks after the lazy bum method of starting the next ridiculous media hype by calling whatever they’re promoting at the time “the new something else” simply to mask the fact that they’re actually pulling blanks as to why the new thing should be a “thing” in the first place, seeeriously rubbed me the wrong way.
Since an annoying case of the sniffles had already shortened my fuse by blowing my plans for a very active day to bits, a string of TV shows on the food channel I was watching with one eye closed got on my nerves before I could muster up enough energy to clamber out of bed and get some fresh air… or the remote. Show after show, they kept adding another “Y is the new X” under the general theme-umbrella of “Drinks” – Gin is the new Whisky. (“Don’t care about either, isn’t this a food channel?”) Fancy flavored Vitamin Water is the new Gin. (“How many Gins did you have before making a statement like that?”) Tea is the new vitamin water. (“Would someone please brew me a cup and fire the guy who allowed this show to be aired while they’re at it? And what the blazes is vitamin water anyway?”) Wine is the new (afternoon) tea. (“Ok, a glass of a rich red starts to sound reeeeeally good right about now.”) Beer is the new wine. (“Get out…”) Craft Beer is the new beer. (“Seriously… get out!”) Cocktails are the new craft beer. (“Ok, I’m the one going out now…”)

You know, I actually think the general idea of pairing a dish with a fitting cocktail is kind of intriguing, but the insanities the guys on that show were dumping into their shakers were just too far out there to take on a flu-fogged head.
Once I had walked off the mood, I gave the whole cocktail idea another go. Bloody Mary… mmmmh steaks. Mojito… viciously hot Caribbean food. Poncha… grilled seafood/fish dishes. After I decided to give my personal favs a chance on the dinner table at some point, I noticed that… none of the yummies above actually appealed to my flu-addled tummy despite the low rumble it was sending my way. A bit of careful consideration on the matter and I realized that both my tummy and my sore throat seemed to have an appetite along the lines of… something cold, juicy, fresh, tart… apples! And the first thing that popped into my head at the thought of apples was, thanks to the parade of cocktail recipes and matching dishes still marching through the far reaches of my headspace, a cocktail! Or, to be precise, a Kir Breton. I hadn’t had or even thought of that drink for a very, very long time – and more time might have passed until I remembered that one if it hadn’t been for those insane barkeeps and their condensed truffle oil Foie Gras daiquiri pangalactic thunderwhatever thingymabob with a twist!

For those of you not in the know: much like the more commonly known Kir Royal, a Kir Breton is a tweaked version of the classic french aperitif “Kir” – a white Burgundy Wine, Chablis or Chardonnay spiked with a glug of Crème de Cassis. The Kir Breton uses Cidre as a base, however – traditionally the famous Cidre from Brittany in the north-west corner of France, hence the name (any high-quality, delicious apple bubbly – Cidre (France) or Cider (UK) – will do, though… just don’t tell anyone from Brittany I said that~). With the cocktail-food connection still fresh on my mind, of course I couldn’t help but think about what would go with a drink so delicious in its simplicity… and all of a sudden, the following dessert effortlessly came together in the blink of an eye: 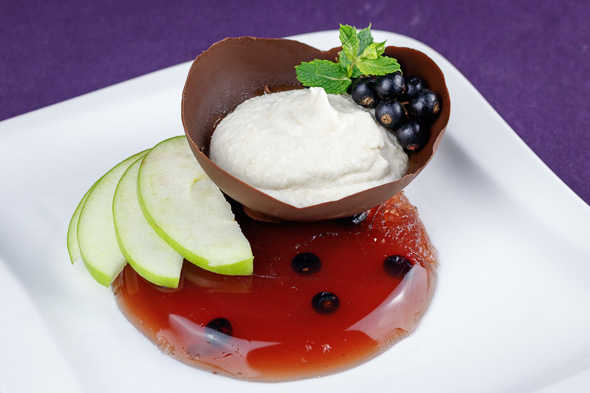 One quick thing before we start: the chocolate bowls I used for the mousse in some of the pictures are really quick and easy to whip up:

The Blackcurrant Jelly
500ml High-Quality Black- or Redcurrant Juice
100ml Crème de Cassis – if you go for eye candy, use redcurrant juice and skip the creme de cassis to keep the jelly bright and translucent to showcase the fruit inside
1 Tbsp Honey
½ Tsp Vanilla Extract
1 Strip of Lemon Peel
3 Leaves of Gelatine – this is going to be a wobbly jelly, if you’d like it to be a bit firmer, use 4 leaves.
100g Fresh Blackcurrants – on or off the stalks, your pick~
3-4 Tbsp Crème de Cassis

1) Pour the liquids into a pot and set it onto medium heat.
2) Stir in the honey.
3) Bring the mix up to a gentle boil and leave the lot to bubble away for about 5-10 mins until you’re left with about 450ml of deliciously intensified juice.
4) Add the strip of lemon peel and give the juice a little stir before leaving it to its own devices for 3-4 mins.
5) Meanwhile, pop your gelatine leaves into a shallow bowl filled with cold water and leave them to soak and soften for 4-5 mins.
6) Once they’re soft enough to be manageable without breaking, squeeze out any excess water.
7) Take the pot holding your spiced-up juice off the stove and whisk in the gelatine leaves. Keep at it until they have dissolved completely, the strain the mixture through a fine sieve into a jug.
8) Quickly pour the proto-jelly into four ramekins, dessert bowls, glasses, small jars – whatever you’d like to show this dessert off in – and set them aside to cool off.
9) Once the jelly has cooled back down to room temperature, move the containers into the fridge for 3-4 hours until the gelatine has worked its magic by solidifying and setting the jelly.
10) As the jelly is just beginning to set properly, about 30-45 mins into the fridge-time, pop in the blackcurrant stalks for eye candy.

The Green Apple Mousse
Don’t start on the mousse before the jelly hasn’t set enough to hold up/bounce off a carefully aimed test-blackcurrant to avoid Titanic’esque sinking disasters – I usually get moving after 2 ½ hrs into the fridge-time.

800g Granny Smith Apples, peeled and cored – starting with ~1kg should get you there once the cleanup is done
50g Light Muscovado Sugar
200ml (Low Fat) Whipping Cream
70ml Clear Apple Juice
2 Tbsp Calvados
Less-Boozy Alt: 2 Tbsp White Port
Non-Boozy Alt: 2 Tbsp Apple Syrup – a) careful about the additional sweetness and b) don’t use spiced/cinnamon syrup, it would Christmasify the whole thing.
4-5 Generous Scrapes of a Tonka Bean – about half a bean or a small heap on the tip of your tsp
Alt: Seeds of ½ Vanilla Pod
1 Pinch of Fine Sea Salt
1 Splash of Lemon Juice
7 Leaves of Gelatine

1) Pick a bowl large enough to comfortably accommodate your apples and pour in enough cold water to fill it up by 1/3. Add the lemon juice and give it a quick stir.
2) As you dice your way through the pile of apples, dump the cubes into the bowl and make sure each and every bit gets a hit of the lemon juice to keep them all from turning an unsightly brown.
3) Once you’re done with the knifework, drain off the lemon water and transfer the cubes to a large pot sitting on medium-high heat.
4) Add the tonka bean, salt and sugar and close the lid for a few blinks to allow the apples to sqeeze out some of their juices.
5) Once that’s happening, carefully fold the dice in on themselves until the sugar has dissolved and turned into a golden sheen around the apple bits.
6) Deglaze the lot with the calvados and apple juice.
7) Turn the heat down to low and allow the apples to simmer and tenderize into a sort-of compote.
8) This will take about 15-20 mins depending on the ripeness of the apples in question – simply have a test-bite from time to time to be sure~
9) Once the remaining fruit dice are deliciously soft and tender, either whizz them up with a stick/ blender or strain them through a fine sieve to be rewarded with a smooth and silky fruit purée.
10) To be honest, I always have at it with my trusty blender to cut off some time and elbow grease. The consistency of the mousse turns out a bit firmer that way – it’s not quite grainy, mind you, but… well Hubby once said “It’s like eating apple cream pie rather than a mousse”. If that’s ok for you, or even better than a seriously airy, foamy mousse, feel free to be lazy~
11) Go through the usual soaking/draining/squeezing gelatine drills and, while the apple purée is still warm, whisk in the leaves until they’re completely dissolves.
12) Set the bowl aside to allow the purée to cool off.
13) In the meantime, whip up your cream to the soft-peak stage and place it back in the fridge until the apple mixture has reached room temperature again – make sure to keep an eye on it, by the way!
14) You’ll want it at exactly the golden point in time where it’s cool enough to not melt the cream down and not cool enough yet for the gelatine to have set.
15) When both components are ready, gently, slowly and patiently fold the cream into the apple purée with a rubber spatula until you’re looking at a glossy, evenly colored cloud captured in your mixing bowl.
16) Distribute the proto-mousse on top of/next to/separated from (again, it depends on the presentation you’ve picked earlier) your by now well-set and chilled blackcurrant jelly base and return the dishes to the fridge to allow the mousse to chill through and set for another 2-3 hrs.
17) Go wild with berry-related deco, add a couple of lemon balm or mint leaves for eye candy just before serving and…

7 thoughts on “Kir Breton or: How a Drink turned into a Dessert”