Sometimes GW2 has a way to poke and prod at my subconscious basic instincts until I give in – the hunter-and-gatherer part of me for example. While I’m not really OCD’ing on achievement collections (my dislike of anything PVP related would make that one hell of an unpleasant experience) I just have to finish things I’ve already started. One wonderful autum morning last year I noticed I was just a few miniatures short of a tier upgrade or a completed tab in all of the miniature collections. Hmm… one or two items short of the finishing line? That would have bugged me to no end until I had taken care of it, so I went Mini-shopping right away to get it out of my system.

One of the first I snatched off of the Trading Post was Tybalt. As soon as I saw him in the collections tab I couldn’t help but think about apples, which reminded me of the newly harvested Braeburns I had in my fridge. The first apples of the season are usually a little bit sour, so I pulled out a bag of mixed raisins, some honey and cinnamon and started to simmer them into a quick chunky compote. For some reason I got bored halfway through and decided to take the cinnamon apples one step further. Having messed around with filo pastry a couple of days before I picked up that train of thought again and turned on the apples, frying pan in hand. So here’s my tribute to Lightbringer Tybalt Leftpaw, Hero of Claw Island. 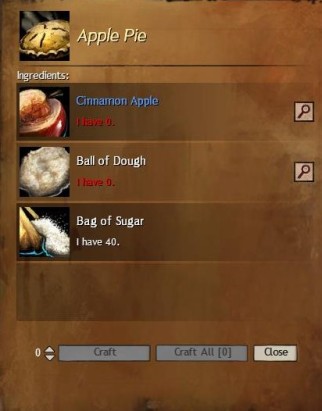 1) For a chunky compote like this I always avoid cutting whatever fruit I’m using at the time into similar sized cubes, If you have a nice assortment of sizes, you’ll get a really nice and thick compote, some apples having dissolved completely, some being perfectly soft and some having some bite left to them. There’s a time and place for every type of compote, this is the time for hearty chunks being held together by their softer colleagues.
2) Dust the cubes with the allspice, salt and nutmeg. Give them a good stir and let them sit for about 10 mins to infuse.
3) Move the spiced apples into a small pot and add the cinamon stick, star anise, calvados or port and 1 tbsp of water – 2 Tbsp of water if you’re skipping the booze.
4) Bring the mix to a low simmer on medium heat. Depending on the type and ripeness of the apples you might have to add a splash of water, just check if the fruits are sticking to the bottom rather than releasing their own juice in the pot. Since the compote is going to end up as a filling for one of the most delicate pastry doughs around, it’s not supposed to be runny or bordering the consitency of a puree – remember this in case you’re unsure about the consistency.
5) Once the apples start to soften, fold in the raisins or cranberries, as many as you like. Have a taste after around 5 mins and decide if the mix needs more sweetness. If it does, add honey. Adjust the other spices too while you’re at it. This time I added some powdered cinnamon since the cinnamon stick didn’t do the one job it had…
6) As soon as you’re satisfied with the consistency of the apples pick out the star anise and cinnamon stick and fold in the roasted walnuts.
7) Set the compote aside to cool off a little. 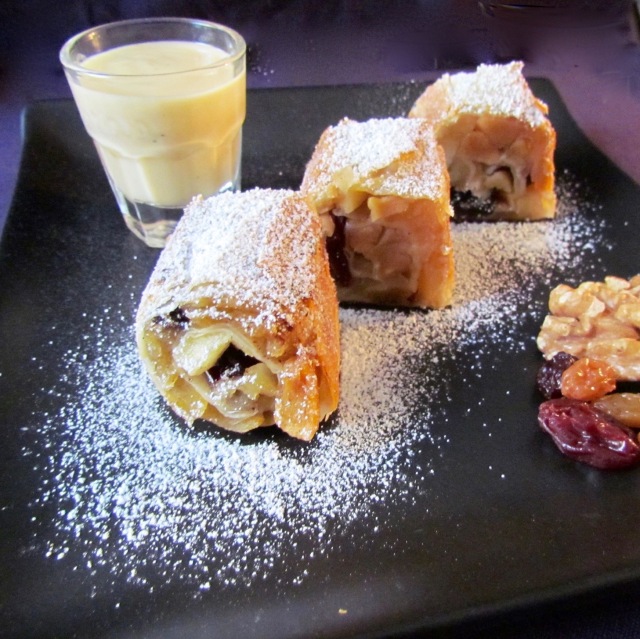 Sure, you can make your own filo sheets, if you have the knowledge, patience and equipment to do so. I, however, stubbornly cling to what remains of my sanity, so I buy the fresh pastry sheets instead. I’ve encountered them in the fresh pastries rack at the supermarket as well as in the frozen goods section. After a couple of headache-inducing meet-and-greets with frozen doughs (grrrr those gyoza rounds – it takes more time to thaw and fiddle them apart than to make them yourself…) I gave up on those.

1) Gently spread out one of the sheets on your work surface, lightly brush it with the melted butter using a pastry brush and dust it with cinnamon and sugar. The sugar at this point will barely add more sweetness (unless you go overboard), its purpose is to caramellize the outer sheet and crisp it up some more.
2) Carefully cover this with the second sheet and brush it with butter again, top it off with a third sheet and another brushstroke of butter. Carefully. If you’ve ever worked with filo before, you know why. Oh and be quick with it while being careful, the pastry starts drying out as soon as it gets into contact with fresh air… I actually make it sound worse than it is, aren’t I…? Anyways…
3) Spoon half of the apple mix on to the lower third of the sheet and spread it out evenly. Carefully (that word again…sorry) start rolling the sheet up – appled end first – as tightly as possible. Think of it as a delicate and sweet version of a burrito – sweet delight snugly tucked inside a couple of layers of dough.
4) Brush the outside of the stroodle roll with a dab of butter again.
5) Repeat this with the remaining 3 sheets of pastry and apple compote.
6) Heat a large – large enough for your stroodles – heavy-based pan on medium heat.
7) Set your stroodle rolls into the pan and keep turning them until they’re crisped up and golden brown all around. You might wonder why my stroodles look kind of square… well I didn’t follow my own advice to turn them constantly, so their own weight flattened the side facing down in the pan on each turn. After the second turn I decided to just go with it and merely turned them to keep them from burning.

The Vanilla Sauce
At this point I had one of those instant brain-freeze moments I occasionally get when I’m thinking of certain ingredients, parts of dishes that just go so well together it’s really hard to think around and do something else with it. Hot Apple Stroodle and Vanilla Ice Cream is one of those classic cases. This time I couldn’t have strayed outside the box even if I had wanted to (shopping options for impromptu experiments on sundays are rather slim), I couldn’t stick to the classic either though, my freezer being woefully devoid of …well…anything. I had all I needed for a quick and easy vanilla sauce at hand however, so that’s what I made instead.

1) Set up a waterbath – a pot over medium heat, a glass or metal mixing bowl that fits the rim of the pot on top. Make sure the bowl doesn’t touch the surface of the water and the water doesn’t reach boiling point – both would make the temperature of the sauce rise too high, turning your sauce into a vanilla omelette, what with the eggs in it and all that.
2) Scrape the seeds out of the vanilla pod with a teaspoon or the back of a knife.
3) Bring the milk, cream, sugar and vanilla seeds to a low boil in a small pot set on medium-high heat. Take it off the heat again as soon as you see bubbles starting to rise. Set the mixture aside to cool off a bit.
4) In the meantime whisk together 1 whole egg and 1 egg yolk in the bowl you’re using for your waterbath, don’t set the bowl onto the steaming water yet though.
5) After about 2-3 mins the milk mixture should have cooled off enough for it to be introduced to the eggs without cooking or curdling them up. Pour the milk/cream mixture into the bowl holding the beaten eggs in a slow and steady stream while stirring constantly.
6) Place the bowl on your waterbath and keep stirring until it’s smooth and creamy. If you’ve never made a sauce like this before, here’s a tip to determine the „right“ consistency: dip the back of a wooden spoon into the sauce and give the dot of sauce a light puff in order to make it spread outwards from the point where your breath hits it, forming a rough shape of a blossoming rose. If the waves you’ve created, the rose petals if you will, keep their shape, the sauce is ready. If you like your sauce a bit thicker, keep stirring until it’s the way you like it, just keep an eye on the temperature.
7) Strain the sauce through a sieve for the perfect silky texture and serve while it’s still warm.

Sure, scooping up some vanilla ice cream to cozy up to the stroodle is less of a fuss, but the outcome of this scramble for alternatives was just too good to skip in this recipe. Hot and cold, crispy and creamy, fruity and sweet, all those lovely contrasts on one plate – I hope you guys enjoy this as much as we did~