Today was one of those days, the ones you wish you didn’t have had the bright idea of doing anything more than heating an instant soup in the kitchen. I felt like prepping my thai salad for dinner like I’ve done tons of times before. As soon as I tipped over the bowl I was grating my radish into, redecorating my kitchen floor in the process, I started getting that sinking feeling… but I soldiered on, having no idea what else to do with the remaining ingredients due to a sudden food brain freeze.

The rest of the prep went just fine, I merely forgot I wanted to pop some sugar snap peas in this time, but what the hell. I wasn’t in the mood for an overly hot experience, so I ditched the dried bird’s eye chillies and used a “normal” yellow pepperoni instead. Bad call. I could’ve doubled the usual amount of bird’s eye and topped them off with a handul of habaneros and still wouldn’t have gone anywhere near to what ended up in my dressing – which of course, for once, I didn’t taste before I dumped it on the salad. 10 minutes later, hickupping, annoyed, slightly sweaty and still hungry I found myself back in the kitchen, foraging around for something that had absolutely nothing to do with what just went into the bin. I came across a couple of bananas, score! I remembered the Tyrian Grilled Banana recipe, rummaged around some more to dig up a passion fruit and had at it. 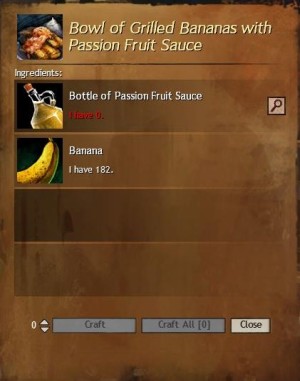 By the way, there’s just no way to make a however heated banana photograph well. Tastes really good though.

These amounts will net you desserts for 2 or 1 effective countermeasure against an unexpected attack on your tastebuds by one viciously hot pepperoni.

1) Pour the sugar into a heavy based pan and try to spread it out evenly – at least the soft muscovado I always use likes to come out of its package in larger crumbs. Add 2 tbsp of the water and set the heat to medium-low. Once the sugar starts to dissolve, stir a couple of times to soften and un-clump the muscovado – you can use normal caster sugar as well, I just prefer the muscovado for its caramel note.
2) Raise the temperature to medium heat and let the sugar melt into a golden caramel, this takes about 5-6 minutes.
3) Drizzle in the lemon juice, add the passion fruit pulp and slowly stir in the Liquor 43 and the remaining water.
4) Split the vanilla bean in halves by running the tip of a sharp knife lengthwise through the middle. Scrape out the seeds of ½ of the vanilla bean and stir it into your syrup. The other half will be used for the crème fraîche later.
5) Add the cinnamon stick and the star anise to the syrup and leave it to simmer over medium heat for 3 -4 mins to thicken up, then reduce the temperature to low or take it off the heat entirely if the syrup is thick enough already.
6) Either strain the syrup through a fine sieve or skim off the passion fruit seeds, anise and cinnamon with a slotted spoon.
7) Set the syrup aside for a couple of mins until it’s needed – keep it warm if possible.

Well, doesn’t this sound fancy… You could actually make a lot of fuss abut this, add sugar and lemon zest and do whatever else you could possibly do to two spoonfuls of crème fraîche, but in this case it’s only supposed to serve as a contrast to the sweet spiced syrup and the bananas, so there’s basically only one thing to do…
1) Place the crème fraîche in a small bowl. Gather up the remaining vanilla seeds and stir them into your crème fraîche until they’re well incorporated.
2) Place the bowl in the fridge until you’re ready to serve.

1) Peel the bananas and cut them in halves lengthwise.
2) Brush a heavy griddle with the butter and set it on medium to high heat, keep a couple of flakes of butter back for now.
3) Place the bananas in the griddle, flat side down, and baste the backs with the molten butter and the juices oozing out of the bananas. If there’s not enough of them in the pan for your liking, add a bit more butter and have at it. Don’t move the bananas around in the griddle, they break up easily.
4) This part takes just long enough for the griddle to mark up the bananas and heat them through in the process. With ripe but still firm, average sized bananas you’re looking at around 3-5 mins. Carefully lift one tip of a banana slice to take a peek at the griddle-marks or the lack thereof.

Assembling the dish
1) Pour some of the syrup onto your serving dishes, then carefully place the bananas on top (good luck!) and spoon the rest of the syrup over the entire length of the fruit (this keeps them from further browning up in case you’re not serving them immediately).
2) Add a dollop of vanilla crème fraîche to each dish and enjoy~!