As you might have noticed, I’m a bit early on hitting the “Publish” button today. The reason for that is as simple as it is delightful~ Right now, I’m on my way out of the house, headed towards Frankfurt Airport where a plane is waiting to take me on a long-weekend trip to Dublin, Ireland. I thought I’d grab this opportunity to share one of our all-time-favorite stews with you guys.

A stew Tyria’s Chef’s Guild initially inspired me to cook up a couple of years back – or rather, it inspired a craving I couldn’t satisfy without taking a little detour. You see, when I saw this on the Tyrian Menu… 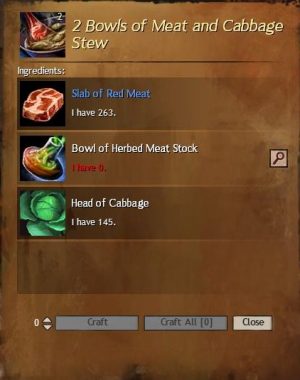 …the first thing that popped into my head with a resounding “EAT ME”-roar was, obviously, a classic Irish Stew. Now, the problem with that simple yet supremely comforting and delicious stew is… I have a specialist for this in my family – my stepdad. His Irish Stew is absolutely divine and I didn’t see the point of encroaching on his territory when one of those late-autumn days screaming for a hearty stew dropped by. It simply wouldn’t have been the same, might even have felt like some sort of sacrilege… ok that might be a tad too much, but you get the picture~ Let’s just say I don’t get the point of entering into a rather pointless competition when his Stew is worth a year’s wait or maybe just a call, a friendly request and a sixpack of bribe-Guinness away. So, when that fateful stew-please-day had both hubby and me longing for a serious hug-in-a-bowl, I decided the time to find a workaround had come. And this one, by now a frequent guest on our dinner table during the cold months of the year, was my solution to the whole “problem”.

Oh, just on a side-note: you guys might know by now that I’m in no way a fan of beer, so take it from a wine person, both components of today’s dish will have nothing beer’y about them other than the malty, full bodied mmmmh~! of the Guinness once they’re on your table. However, I do recommend a swig or two of the black gold to go along with it~

The Meaty Prep-Work
As usual when dealing with large chunks of meat, especially when they’re of the potentially tough or chewy sort, I go through the motions of brining them overnight to tenderize and pre-infuse them with a couple of aromas beforehand. While this is something I do on auto-pilot, this is an optional step on the road to a delicious stew. However, if you’re going with the brisket-alternative rather than the prime rib, I highly recommend going down this road. The prime rib doesn’t need as much help in the juicy-and-succulent department, but in case you’re unsure about this particular cut of beef, brining it doesn’t hurt either. In either case, give the meat a once-over to check if the butcher missed a grisly bit hiding in the folds of the meat – remove anything that looks suspicious before moving on.

1) Place the brisket, preferably still in one piece, in a large, airtight container.
2) Pour in enough water to cover the meat sitting inside with at least 2 cm of liquid.
3) Measure the amount of water and calculate the exact amount of salt you’ll need for a 7% solution.
4) Add the water and salt to a pot, add the spices and bring the lot to a boil. Continuously stir until the salt has dissolved.
5) Set the brine aside to cool off entirely.
6) Pour it back into the container holding the beef, seal the lid and place it in the fridge for at least 12 hrs.
7) Once the time to prep the stew has come, drain off the brine, thoroughly rinse the meat under running water, pat it dry with paper towels and cut it into 2 cm cubes.

The Guinness Stew
250g Onions – I use differently colored onions for this one and cut one half into ½ cm thick half moons, the other half into 1cm cubes. The half moons will melt, the cubes will add some texture and dots of color.
800g Prime Rib or Brisket, cut into 2 cm cubes – see above
1 Tbsp Sunflower or Rapeseed Oil
250g Carrots, topped, tailed, peeled and cut into 1 cm disks
200g Parsnip, topped, tailed, peeled and cut into ½ cm cubes
2 Celery Stalks, finely sliced – they’ll melt and merely leave behind a hint of freshness rather than their usually strong aroma
700ml Guinness, at room temperature – and one bottle for the cook~
100ml Beef Stock
Salt and Pepper to taste
1 Star Anise
2 Heaped Tbsp of Concentrated Tomato Purée
200g Canned Plum or Cherry Tomatoes – preserved in juice, not brine
10-14 Baby/Fingerling Potatoes, thoroughly washed and halved lengthwise
1 Handful of Flatleaf Parsley Leaves, finely chopped

1) Set a large (stew-) pot or casserole onto high heat and add the oil.
2) Give the pot a couple of minutes to heat up to it’s maximum temperature, then add the beef cubes and, while constantly flipping them over, give them a nice and even, golden-brown sear.
3) Generously season the cubes with salt while you’re at it.
4) Remove the cubes, place them in a bowl and set them aside, covered with a sheet of aluminum foil, for the time being.
5) Place the carrot disks in the pot and allow them to take on some color as well – 3-4 mins should do.
6) Sprinkle in the onions and keep the mixture moving with a wooden spoon until they start to soften a bit.
7) Add the parsnip along with the celery and the star anise and sautée the whole bunch until the roots start to caramelize and develop a nicely golden rim around the edges.
8) Deglaze the pot with the stock, stirring the lot with a wooden spoon in order to catch and whirl up all of the yummy roasting aromas sticking to the bottom.
9) Return the beef to the pot, closely followed by the beer and the tomatoes, and, after a gentle stir, allow the contents of your pot to work up a boil.
10) Once the stew reaches the boiling point, leave it to bubble for 2 mins, then turn the heat down to low.
11) Close the lid once the action in your pot has settled down a bit and leave the stew to simmer away for 1 ½ hours.
12) Stir in the tomato purée and season the stew with a good crack of pepper and another generous pinch of salt. Tasting the brew now would probably result in a whoa-overseasoned!-Moment, but that’s where it’s supposed to be at this point – the potatoes will take care of the issue~
13) Speaking of… time to pop in the potatoes, cutting surface facing up, and close the lid again.
14) Allow the stew to simmer for another 30 mins. Now would be the perfect time to get the Guinness Soda Bread going in order to have both items ready at the same time~
15) Remove the lid, set the heat to medium-high, and give the stew another 10-15 mins to gently bubble away – bite-testing one of the potatoes will tell you when your hug-in-a-bowl is done.
16) Have a taste and adjust the seasoning if necessary. Hunt down and remove the star anise afterwards.
17) Ladle the stew into warm bowls, sprinkle the servings with the parsley, and serve it with a thick slice of the Guinness Soda Bread. 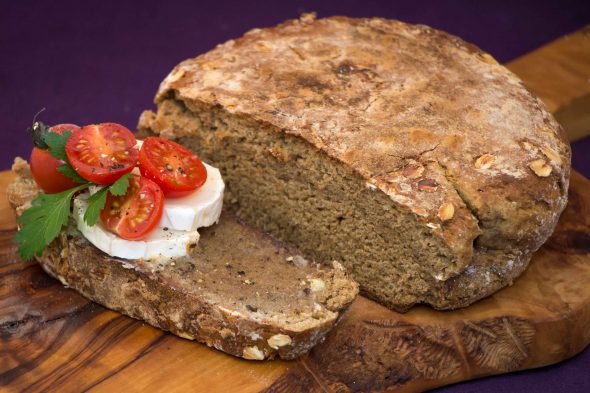 The Guinness Soda Bread
This one’s as easy-to-make and healthy as it is delicious and there’s one incredibly wonderful fact about it that makes it really special: It’s a pot-baked bread! Weeee~ I’ll be turning bottoms on a pint or two of Guinness at it’s birthplace to celebrate this gem of traditional Irish Cuisine tonight!

1) Sift the flours, salt and soda into a large mixing bowl
2) Use your fingers to loosely mix the dry ingredients
3) Add the wet ingredients and again, claw up your fingers and lightly stir through the dough until it balls up on its own.
4) Lightly, very lightly knead the – excuse the term, but you’ll see what I mean – goop for 1 min. It’s a very wet dough, if you squeeze it, you won’t see the end of the stuff sticking everywhere. Don’t think about lumps or the usual dough-related „smooth and even“ description, the soda takes care of everything.
5) Brush a pot – I use my 16 DIA heavy-based pot to get a ~5cm thick loaf – with a dab of sunflower oil and dust it with a few pinches of flour to prevent the dough from sticking. Sprinkle the bottom of the pot with a few oats. Remember to give the sides of the pot the oil and flour treatment as well.
6) Set the pot onto medium-low heat.
7) Dust your hands with a bit of flour and wriggle the dough onto one of them – if it refuses to leave the bowl, lift up a corner and sprinkle a few oats underneath. Turn and wriggle the ball of dough onto your hand without applying too much pressure – if it still puts up a fight, dust it with rye flour (less sticky than the wheat flour) and give it a very quick finger-knead, then try again. You might think about simply moving the dough out of the bowl right into the pot to steer clear of the potential mess, but the detour across your hands will tell you if the dough is ready for the pot-stage yet.
8) Once you’ve maneuvered it onto your hand, gently place it in the pot and lightly press down on the surface to edge the dough towards the rims of the pot to create a somewhat even-surfaced, tight-fitting loaf on the bottom of your pot.
9) Sprinkle the surface with a couple of oats and pop on the lid.
10) Leave it to bake for 10-12 mins, then turn it over to the other side for another 10 mins. Turn or shake the pot from side to side every couple of minutes to keep it from sticking.
11) To check if the bread is done, tap or knock on the … well usually, you’d tap the „bottom“ of a bread for this purpose but since we have 2 bottoms on this one, knock onto the side currently facing up! If it sounds dully hollow, it’s done. If not, give it another 3-5 mins on each side until it does.
12) It’s a very dense bread, best served warm with a yummy stew like this one or with butter and a nice and fruity jam!

All right! I really hope you guys enjoy this one while I try not to trip over myself – must dash! Got a plane to catch!
Just one last thing: if today had a theme song, for me, it would be Fiddler’s Green – Ol’ Dun Cow – which is currently blasting from my earphones~! See you next week~!