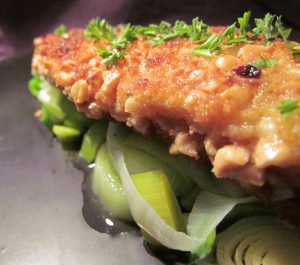 As I was trying to get some sort of order into my personal collection of recipes, marking the ones I wanted to use for specific months or seasons for the blog I realized I might be running into some minor snags down the road, during the summer stretches in particular. The last couple of summers quite literally left us standing out in the rain until halfway through, then came crashing in with record temperatures without even as much as a „How do you do?“, causing havoc left, right and center for 2-3 weeks, just to poof out of existence with temperature drops from 40°C to 12°C in a matter of 1-2 days.

The kitchen-related result of that mess was… We went from warm-and-fuzzy, soul-foody main dishes to living off of tomato salad and watermelons without much of a transition. Of course that basically put my kitchen out of business for the duration of the heatwaves and me somewhat out of practise in the summer-dish department. This year doesn’t appear to be much different so far in regards to the weather, right now were still trudging through the rainy portion of it, but at least I came prepared this time and grabbed the chance to brush the dust off of some of my favourite „summery“ main dishes and actually make them during the summer months rather than in spring (“better make this as long as I can”) – before my little kitchen turns into hell’s front porch without me even having as much as thought of turning on the stove – or in autumn (“should’ve done this earlier…this isn’t the same”). If that even happens this year – looking at the two rivers running through town, having recently tripled their size, I’m really not sure what to expect anymore. Well hell, if I can’t have a decent „summer“ outside, I’ll cook one up! Here’s one of my all-time favorites, healthy and light on all counts, short on stove-time and little to no effort to conjure up.

The Bird
300g Turkey Breast or Schnitzels
2 Medium or Large Eggs, beaten into an eggwash
70-100g Hazelnuts, blanched and crushed
100g Plain Flour
50g Breadcrumbs – for once, normal breadcrumbs work better than Panko
A Pinch each of Salt and Pepper
2 Tbsp Clarified Butter or Ghee

1) Cut the meat into 2-3cm wide strips. You could also just keep the meat in one piece rather than cut it into slices, cutting it first makes it easier to flatten out, though. Plus, this is one of those lean-back-on-your-couch-with-a-bowl-of-yum kind of dishes, at least to me, so I like to avoid the need for a knife in this case.
2) Lightly brush the strips with a dab of olive or vegetable oil and place them between two sheets of clingfilm.
3) Use a rolling pin or a small pan to gently bash them… I know, technically that’s an oxymoron, but I suppose you get the picture… and flatten them out between the sheets. Try not to rip them apart while trying to get the pieces flattened out as thinly as possible. This goes toward cutting the cooking time of the bird – in this case that’s not just important in regards to possible heatwaves inside and outside of your kitchen, it’s mainly necessary because the nuts can and will burn up on you before the turkey is cooked if you don’t flatten it before it hits the pan.
4) Prep an assembly line of bowls to cover the meat in your soon-to-be crust: the first bowl should hold the salted/peppered flour – don’t forget to actually blend the salt and pepper into the flour evenly… somehow I manage to skip that step 1 out of 3 times. The next bowl holds the eggwash, and a third a thoroughly mixed through blend of breadcrumbs and nuts.
5) If you want the crust to lift and get real crispy – an option for those of you with a deep-frying gizmo of sorts – dip the strips into sparkling water before turning it in the flour. This kinda-sorta works with a normal pan as well, but you’ll need enough clarified butter or ghee in the pan to cover the strips on top as well for the „real“ result. Otherwise it does improve the crispy-factor while making it really hard to turn the pieces without the crust coming off. Trade-offs and decisions… I’ll leave that one to you guys.
6) Sticking to my low-fat MO, I usually skip the sparkling water and go right to pan-frying the strips after I put them through the breading ordeal.
7) Heat the clarified butter or ghee in a large, heavy-based pan set on high heat.
8) Once it’s hot enough to make a drop of water dance and vanish, start with the breading – don’t give in to the urge to prep the crust in advance, the breading will turn soggy within minutes after coating the turkey. Wait for the pan to be ready, then get the show on the road.
9) First turn the turkey strips in the flour, then drag them through the eggwash and finish them off by turning them in the crumbs & nuts mix. Try to move them out of the nuts into the pan quickly, since, as opposed to the breadcrumbs, the nuts don’t soak up some of the eggwash and stick to it as a result. If you didn’t pick up enough of the nuts, press them onto/into the side of the strips facing up as they hit the pan. If none of them stick for whatever reason, sprinkle a couple of nuts into the pan in a pattern roughly fitting the shape of the strip you’re about to put in, lay the meat on top of them and then press some on top of it as well.
10) Fry the strips until they’re golden and crispy on both sides. Depending on the thickness of your strips and how much of a crust you covered them in, this only takes about 1-3mins per side.
11) Place the finished pieces on a plate lined with paper towels to soak up any excess fat until you’re ready to serve.

The Salad
2 Leeks, white and light green parts only
5 thin Slices of Ginger
2 Passionfruits – having a third at hand can’t hurt, in case they’re not perfectly ripe and juicy
2 Tbsp mild Olive Oil
Opt: Passionfruit Syrup or a little bit of honey – in case the passionfruits are too sour
Salt and Pepper to taste

1) Carefully clean the leeks and slice them into 3-4mm rings.
Place them in a large mixing bowl, lightly salt them and toss them with 1 tbsp of olive oil.
2) Place a large pan on medium heat and add the second tbsp of olive oil along with the ginger slices. Once the aroma of the ginger starts wafting up to you, add a tbsp of tap water and the leeks.
3) Sautée them until they’re soft – roundabout 4-5mins, but have a taste anyways to judge whether you’re satisfied or not.
4) Meanwhile, pick another mixing bowl – or the one you’ve used to prep the leeks – and place a fine sieve on top.
5) Scrape the pulp out of the passionfruits into the sieve to remove the seeds – skip this step if you don’t mind the seeds. If you’re straining them out, use the back of a ladle to persuade every last bit of the yummy pulp sticking to the seeds to come loose and drop into your dressing.
6) Add one or two cracks of your pepper mill and another pinch of salt. I have a couple of cayenne peppercorns mixed into the black peppercorns in my trusty pepper mill, so you could add some cayenne or just a few chilli flakes as well if you’d like. Just don’t go overboard with either, you don’t want to overpower the passionfruits.
7) Have a taste of the leeks and make sure you have a bit of ginger on your fork as well. Depending on your personal preference and the intensity of the roots you’ve used you’ll have to decide whether to remove and discard the ginger or to remove it just to finely slice and return it to the salad – or do either with portions of it. I can’t really give you any advice on this, I’ve never dumped all of the slices, but I’ve also never kept the same amount in the salad either… ginger is one of those things you have to be in the mood for, even if you like it in general, I suppose. Just treat is as you would any other kind of seasoning – taste and adjust until you’re happy with it.
8) Add the leeks and their cooking liquids to your dressing. Don’t pour in all of the cooking juices if it turns out there’s more than 2-3 tbsp of them – leeks can give off a lot of water. In that case, add the leeks first, then 2 tbsp of their juices. Use more of it to adjust the seasoning of the dressing if necessary.
9) Toss the leeks until the dressing is evenly distributed and the leek ringlets are coated with a glossy and light golden touch.
10) Divide the warm salad onto 2 plates, arrange the turkey strips on top and there you go, summer on a plate~!