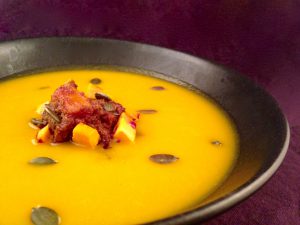 Another year, another visit by the Mad King and his sugary minions, his bad jokes and endless heaps of pumpkins. As usual, whenever it’s festival time in Tyria, hubby and I spent several long weekends in front of our screens, enjoying the Tyrian way of party’ing. Now, if you’ve had a peek at this week’s Midweek Special, you might have noticed me saying something along the lines of “Ew, pumpkins.” Well, after hours and hours of hacking, carving and slaying though what seemed like Tyria’s entire pumpkin population to honor Mad King Thorn, I couldn’t help but wonder where all those nicely carved pumpkins would go after the festival.

Just throwing them out would be kind of a shame now, wouldn’t it? Since I haven’t dealt with pumpkins all that much before, I decided to have a closer look at the Chef’s Guild’s recipe list for suggestions as to what to do with with them, and this is what I found: 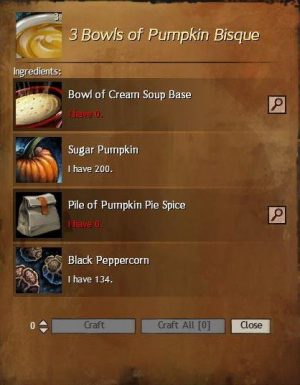 Since I wasn’t in the mood for an actual cream-based bisque, I took the general idea of a smooth and silky bisque and tried to translate it into a non-cream, low-fat, high-yum, fruity sort-of-bisque.

It took several years of celebrating the Return of the Mad King for me to give in to the pumpkin mania, but with the leftovers of the pumpkin massacre – either that pumpkin was too big or my knives too small… – I created during the Curry Pumpkin Purée Experiment still waiting to be used, I gave up my struggle against the pumpkin brainwash. A soup sounded pretty good to me, so I went to work, picked up one of my grandma’s alsatian recipes and twisted and turned it until it suited my style – I kicked out the pounds of butter and cream for starters and added some orange to lighten up the load… Anyways, if a soup is supposed to serve as a wholesome meal, I need something to bite either with or in it, so I rummaged around in my headspace in search of a topping or side for a while until it hit me – my Pumpkin Pesto~! I’ve made that one on several occasions, our wedding reception included, and people were scrambling to get to it. I have to admit though, I’m rather partial to it. See, the thing with pumpkin seeds is, quite similar to bacon, a heaven-and-hell thing for me. One bite is absolutely divine and the next one abruptly turns into a pungent nightmare on my tastebuds, making me wonder what possessed me to actually enjoy the previous bites. What can I say, I’m weird that way – I can’t even say I don’t like it, because I actually do, but the point where one would usually say “ok, I’m getting close to having enough of this” doesn’t exist for me when it comes to pumpkin seeds. It seems, my tastebuds skip right to the end and scream in disgust from one second to the next… oh, well. More reason to really enjoy the taste of it as long as it lasts~

The Pumpkin Pesto
Since this one is a staple, extended shelf life and all, I’m giving you the amounts I usually go with if the occasion calls for a jar of the pesto – enough for 1 new pantry resident, a 400ml jar, plus the amounts you’ll need to top off 4 servings of the soup – which, under normal circumstances, are the don’t-fit-in-my-jars-anymore-leftovers that magically, and very quickly, I might add, disappear out of the fridge when hubby and a slice of bread are close by.

500g Hokkaido Pumpkin
200g Pumpkin Seeds
250ml Pumpkin Seed Oil – you might not need all of it, depending on the juicyness of your pumpkin
1 Garlic Clove, finely chopped
Coarse Sea Salt
Freshly ground Nutmeg and a good crack of Black Pepper to taste

A word on pumpkin seed oil before we begin:
This is one of those top-shelf products that are expensive but well worth their price. If you see several bottles standing next to each other at the store, with one of their prices hitting rock bottom – comparatively – don’t buy that one. The extraction process is a rather lengthy and complicated one, compared to other oils, and the pumpkins providing the seeds, the styrian oil pumpkins, are a rather rare variety. This dark green, almost black oil is very intense and nutty, which is why it’s often used in desserts as well, and if it’s not produced with care or not handled well afterwards, it develops a bitter and rancid aroma. So, low prices on pumpkin seed oil – not a good sign. I would also advise against just buying the most expensive one, but that’s just me. Tinted glass bottles are a good sign, by the way. Like most oils, pumpkin seed oil doesn’t react well to light, much less daylight.
If you find yourself in the lucky position of having a delicacy store or a really well sorted artisan food market somewhere nearby, go there, have a look and a taste around the place – the vendors there not offering a free taste of their products here and there is a rare exception.

1) Use a very sharp knife or, if you happen to be facing a ginormic pumpkin like I did, a cleaver to slice the silly thing in halves. Thoroughly scoop out the seeds and make sure to remove the green’ish thready stuff that formerly kept them attached to the inside of the pumpkin. You could dry and roast the seeds if you’d wanted to – thoroughly rinse them and remove any and all remains of the pumpkin flesh, pat them dry and pop them into the oven, evenly spread out on a tray lined with baking parchment, for around 1,5-2 hours at 80-90°C.
2) Flip the pumpkin halves onto their cutting surface and cut them into 5mm thick slices.
3) Grab a veggie peeler, remove the skin and dice the slices into 5mm cubes.
4) Set a heavy-based pan onto medium-high heat, add the seeds and roast them in the dry pan until they’re golden… well, as golden as the dark green seeds can be, you get the picture. Keep shaking the pan from time to time and have an ear on the sounds the seeds make. Once the soft, occasional crackling turns into more vigorous pops, have a taste and see if they’re toasty enough for your taste.
5) Turn the seeds out into a bowl, set it aside for the time being and give the pan a quick wipe with a paper towel to remove seed splinters and dust.
6) Add 2 tbsp of the oil to your pan, add the garlic and leave it to sizzle for about 1 min before adding the pumpkin cubes.
7) Season the contents of your pan with a generous pinch of salt, pepper and nutmeg.
8) Give them an occasional stir and have a test-bite after 6-7 mins. In my experience, if you’ve kept in the neighborhood of 5mm cubes, they should be nice and tender after 6-8 mins. Since it’s not always that easy to cut something hard like raw pumpkin into evenly sized and shaped cubes, having a few bites along the way helps a lot to keep them from overcooking and turning into a mushy goo. They’re perfect once they’re soft, just past al dente, but not squishy.
9) Scoop about ¼ – 1/3 of the pumpkin cubes out onto a cold plate, set it aside and move the rest of the lot into a blender jug, food processor or a stick-blender friendly container.
10) Repeat this with the seeds, have ¼ – 1/3 of them join the pumpkin cubes on their plate for the time being and add the rest to your whizz-o-matic before adding 5-6 tbsp of the oil.
11) Blitz the lot into a smooth purée while adding the rest of the oil in a slow and steady stream until you’ve reached a thick and creamy consistency.
12) Move the pesto into a mixing bowl and fold in the seeds and cubes you’ve set aside earlier.
13) Have a taste and, if necessary, adjust the seasoning with more salt, pepper and nutmeg.
14) Move the pesto – once you’ve removed 4 heaped tbsp to top off the soups and placed them out of harms way – into an airtight container or sealable, sterilized jar while it’s still warm and close the lid.
15) If you’ve sterilized all of the tools – mixing bowl, spoon, jar or container – prior to using them, this pesto will have a shelf life of about 8-10 weeks. Just make sure it’s stored in a cool and dark place.

Let’s add some color to the dish! 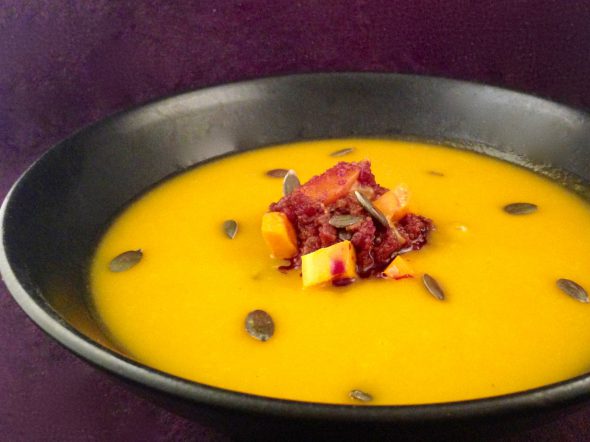 The Pumpkin-Orange Soup
600g Hokkaido Pumpkin, peeled, deseeded and cut into 1cm cubes
1 White Onion, finely chopped
1 Large Carrot, peeled and thinly sliced
600ml Vegetable or Chicken Stock
1 Orange, juice and Zest – keep a second one nearby, just in case the first doesn’t do the trick
1 Tsp Saffron Threads – Saffron and vanilla, the world’s most expensive spices! How’s that for an unassuming, easy soup…? We’re not talking copious amounts here, though, so don’t worry.
½ empty Vanilla Pod – I always have one tucked away in a phial of coarse sea salt. If you thoroughly rinse it off after using it for something like this this, you can re-use it about 3-4 times while it does an excellent job at infusing the salt with its aroma in the meantime.
2 Tbsp Olive Oil
Salt, Pepper
Orange extract – to compensate for not perfectly ripe oranges

1) Heat the olive oil in a pot, large enough to hold everything, set it on high heat and add the onion cubes. Sautée them for about 1 min while stirring constantly.
2) Turn the heat to low, pop on the lid and leave them to steam for 4-5 mins.
3) Take the lid off again and continue to cook them for another 3-4 mins, stirring occasionally, until they’re soft and a light golden brown.
4) Add the saffron, pumpkin and carrots, turn the heat up to medium and sautée the bunch for 5 mins while stirring regularely to prevent major stick-and-burn incidents.
5) Pour in the stock, crank the heat up to high, bring and bring everything to a rapid boil.
6) Once the stock is merrily bubbling away, it’s time to turn the heat back down again, to medium-low this time, and to leave the lot to simmer away for 15 min or until the pumpkin is almost perfectly soft.
7) Add the vanilla pod and orange zest and give the soup another 5 mins to take on their aromas.
8) Fish out the vanilla pod, add 1-2 tbsp of the orange juice and blitz the soup until it’s smooth and silky.
9) If it ends up being too thick for your liking, have a taste and decide whether to thin it down with more stock or juice.
10) Once you’re happy with the consistency, have a taste of the soup with a dollop of the pesto and adjust the seasoning with salt, pepper if needed.
11) In case the orange aroma comes off a tad too weak, add some more zest or a drop of orange extraxt. Close the lid and give the adjustments a couple of minutes to work their magic, then repeat the taste-adjust action if necessary. 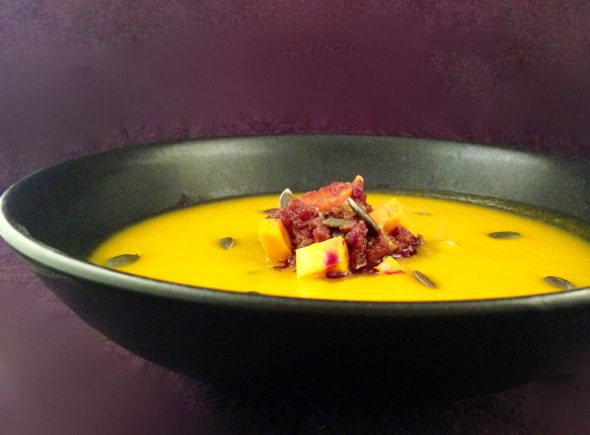 Assembling the Dish
1) Pour the soup into warmed deep dishes or soup bowls.
2) Place 1 tbsp per serving in the middle or in smaller dollops around the rim of the bowls.
3) Dot the servings with toasted punpkin seeds and dig in!