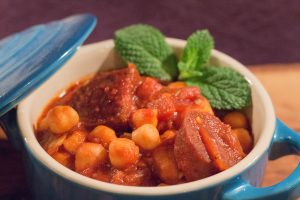 Oh yes! December, winter, a “real” one no less! Unlike the last couple of “winters” it’s cold and dry enough to actually justify the mere existence of hot spiced wine on a christmas market – and to make the prospect of a wonderfully aromatic and comforting stew waiting for you at home a really good reason to look forward to the end of the day.

Due to the warm winters in recent years, I haven’t given the whole “Stew” thing all that much attention, but there’s one in particular I cook up on a regular basis as soon as it’s (supposed to be) cold enough outside, my Chorizo and Chickpea stew. I’ve just recently been reminded of it when I was checking the Chef’s Guild’s list for new additions and encountered a dish involving Wurm.

The various items involving Wurm Meat in the Chef’s Guild’s cookbook have always been a minor headscratcher for me, so, at some point a couple of years back, I decided to shoo the slightly disturbing imagery out of my head by loosely translating “wurm” into “sausage” whenever I was going to deal with those recipes. Not that doing that made the whole “wurm meat” ingredient thing any easier, mind you… things on the sausage’y side of things are very, very rare guests in my kitchen, since they’re generally not a shining example for the whole “healthy” mantra I usually stick to in my kitchen. There’s a time and a place for everything, though~! Chorizo is one of the very few exceptions to my usually sausage-free culinary life. Specifically a variety of chorizo made with beef instead of the usual pork! If you like pork, you’ll probably have a hard time imagining how happy someone can be about finding a perfectly spiced sausage sans the pork that has always kept that someone from having more than just a whiff of the stuff and getting annoyed about not being able to stomach an actual bite of it… Anyways, that problem is solved now, spanish specialities to the rescue! 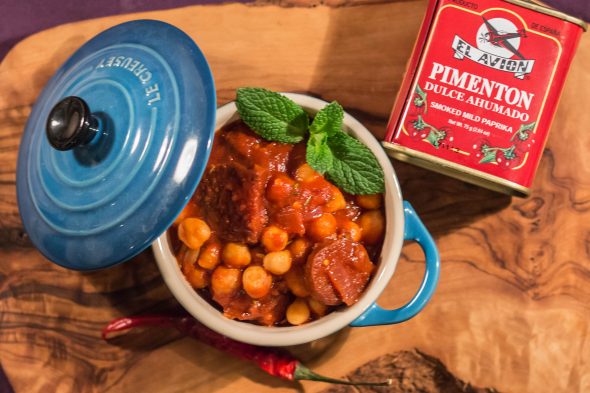 I have to admit, the Tyrian version didn’t provide the initial inspirational spark in this case – in this case, the spark went backwards in a way… I saw this dish on the Tyrian menu a few years back and said ”Look! This looks just like my chorizo stew!” Shoving dark thoughts about Quaggan spies in my kitchen back into the silly-box, I took the discovery of this Tyrian dish back then as a sign to share a steaming bowl of this soul- and heartwarming yum with you guys someday. And now, that time has come~ Here goes! 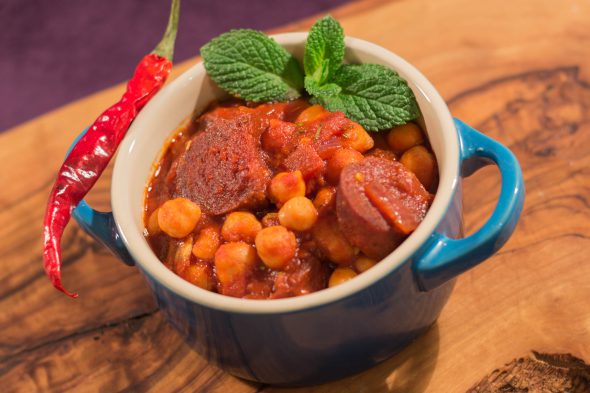 The Chorizo Stew
1 Tbsp Olive Oil
4 Shallots or 1 Red Onion, finely diced
1 Clove of Garlic, finely chopped
1 Tbsp fresh Rosemary Needles, finely chopped – or ½ Tbsp of dried Rosemary
1 heaped Tsp Pimenton Dulce – you could substitute this one with smoked sweet paprika powder if you can’t get your hands on the real deal.
1 heaped Tsp Pimenton Forte – this can’t be substituted. Well sorted delicacy stores and spice heavy shops should have it in stock, though. Last – or first~? – resort: online spice shops~
250g Chickpeas, drained and rinsed – 1 average sized tin of chickpeas usually nets you 230-250g chickpeas once you got rid of the preserving liquid
2 Tbsp Sherry Vinegar – another thing that can’t be replaced without loosing the character of the dish. It never hurts to have a bottle of this in the house anyways
200g Ring of Chorizo, sliced into ½ cm thick disks
400g canned Date or Cherry tomatoes, preserved in juice

1) Drizzle the oil into a heavy-based medium-sized pot, set it onto medium heat and leave the oil to heat up for 2-3 mins.
2) Add the shallot or onion cubes, pop the lid on and cook them for 3-4 mins until they start to soften.
3) Stir in the garlic, turn the heat to medium-high and sweat the lot until the onions turn translucent.
4) Scatter in the sliced chorizo, close the lid again and give the sausage about 3-4 mins to start “melting” – the juices seeping out of the chorizo as it warms up will do a wonderful job flavoring your stew.
5) At this point, you could take it a step further and completely render off the chorizo and fry the slices in their own fat on medium-low heat until they turn crispy. Do not take your eyes off the slices through, as soon as they loose their last drop of fat, they burn to cinder within a blink of an eye. While I love the occasional chorizo crisp on a salad, for a comfy stew like this, I personally prefer them a little bit more on the soft and juicy side – play around with the consistencies a bit to find out which one’s your stew-related favorite~
6) Once that’s done, dust the slowly sweating or crisped up chorizo disks with the rosemary and the two types of pimenton. Pop on the lid back on, turn the heat to medium-low and leave the lot to mind it’s own business for 2-3 mins.
7) Deglaze the pot with the sherry vinegar and stir up every last morsel of yum sticking to the bottom of the pot with a wooden spoon.
8) Gently fold in the chickpeas and let the mixture simmer away for around 10 mins.
9) Add the tomatoes to your pot, turn the heat to high and bring the stew to a rapid boil.
10) As soon as it reaches a bubbly peak, take the stew off the heat. Close the lid and let it rest for 5 mins.
11) Have a taste and adjust the seasoning with salt, pepper, sherry vinegar and pimenton if necessary.
12) In case the chorizo doesn’t pack enough of a punch for you, feel free to add a bunch of chilli flakes – shredded chipotles are a good match for this palette of aromas. In case the opposite turns out to be the case, add a dollop of crème fraîche~
Serve it in warm bowls, lean back and stick out your tongue at any- and everything unpleasant, cold or hectic in the outside world~

As you might have noticed, this is a rather “lazy” recipe. Two cans, a ring of sausage and a bunch of spices, nothing fancy, but far from boring – if you have a good chorizo in easy reach, that is. It’s one of those spur-of-the-moment dinner choices that usually pop into your head in a “wow-I-want-this-NOW” kind of inconvenient craving-attack – and in this case, chances are you actually have all of the ingredients in your pantry! At least, I keep 1 round of these ingredients stashed away for stew-emergencies in the back of mine during the cold months.