All right, time for part two of my Madeira at Home experience – the last part, for now! Other yummy ideas, blurry or refined, I brought back home, captured in my infamous notebook, are better suited for the warmer months of the year~! This one was the result of the forgotten Ginja that kept haunting us like that one item you always forget on grocery trips and only remember once youre back home, stashing everything else away.

We even managed to pick up a bottle at Funchal Airport and forget all about it after we placed it back on the shelf to browse the duty-free a while longer to kill some time before our plane was due to take us back home. In the end, I suppose, leaving the cherry liquor behind wasn’t a bad thing after all, considering neither of us is one for high voltage hooch in drinks – with a few and far between exceptions, of course – or desserts. While I was staring out of the window, watching Madeira disappear into the azure blue of the Atlantic, I went over some dessert’y cherry options and tried to figure out how to give them a new, outside-of-my-usual-box kind of chocolate’y sweet context while providing us with the perfect dessert to put the proverbial cherry on top of the hearty and intense Stuffed Duck & Cherry Chutney recipe that was already taking shape in my head at that point. Hang on… cherry on top? Putting a cherry on something usually involves whipped cream… whipping cream and chocolate… a mousse! Dear pilot, would you mind breaking some speed limits and laws of physics? I need my kitchen, now!
So here’s what I came up with to tip my hat to the neglected Ginja – I took the idea of a heady liqeur served in a chocolate cup and turned it into a dessert-wine-touched cherry compote served on a fluffy cloud of Nougat Mousse.

The amounts listed will net you about 4 servings.

The Mousse
2 ½ Leaves of Gelatine – or a vegetarian substitute
100g Nougat, cut into 1cm cubes – you can find good quality nougat in the baking goods section of most grocery stores or supermarkets, unless you feel like going to town with the really good and expensive belgian nougat.
1 Tbsp Unrefined Cocoa Powder
300g Whipping Cream – no-/low-/full-fat options all work, take your pick~ Nougat is quite the heavyweight flavor- and calory-wise though, so I’d recommend a low(er) fat option in any case.
1 whole Egg
2 Eggyolks
2 ½ Tbsp Fine Baking Sugar

1) Pop the gelatine leaves – or a vegetarian alternative – in a bowl of cold water and leave them to soak for 5 minutes.
2) Whip the cream with an electrical whisk until stiff peaks stand at attention when you pull the whisks out of your bowl. Place the bowl in your fridge for the time being.
3) Place the nougat in a waterbath setup and gently stir it while it’s melting. This takes a lot less time than it would take to melt the same amount of chocolate! Just about 2-3 mins and you’re golden.
4) Add the cocoa powder and fold it in with a rubber spatula until it’s well incorporated. Set this bowl aside and place a second bowl on your designated waterbath-pot.
5) Add the whole egg and the two yolks to that bowl, sprinkle them with 1 tsp of the sugar and whisk the lot until it turns into a creamy, pale yellow fluff.
6) Squeeze the water out the gelatine, add the leaves to the eggfluff and fold it in with a whisk until it’s completely dissolved. Be gentle with the whisk, you don’t want to break all those pretty bubbles you’ve just whisked into the egg mixture.
7) Take the bowl off the simmering water.
8) Swap your whisk with the electrical one once the gelatine has blended into the mix, set the speed to low and keep whipping.
9) Keep the whisks, running at low speed, near the rim of your bowl and add the cooled nougat in a slow and steady stream.
10) As soon as the mixture looks “almost” well blended, a light brown fluff with the occasional darker nougat streak, remove the whisks and pick up a rubber spatula.
11) Gently fold in the chilled whipped cream. Going slow, trying to avoid overwhipping or breaking up the foamy texture, wins the race. Keep at it until the proto-mousse comes together in an even, light-brown fluff.
12) Fill the mixture into serving dishes, pretty glasses, one large bowl or whatever else you could think of serving a beautiful dessert in – just leave some room for the cherries on top~
13) Chill the mousse for at least 4-5 hours – 6-7 hours if you went with the one-bowl strategy.

Mousses in general are a wonderful type of dessert to prep in advance for a busy dinner evening. Cover the bowls holding the mousse with clingfilm after they’ve spent 3 hours in the fridge, and place them back inside until you need them. If you’re making larger amounts use several shallow dishes rather than a really large one – the mousse might not set properly otherwise.

The Compote
This one’s meant to turn the mousse happily chilling in your fridge into a hot-and-cold combo, although it’s perfectly yummy once it’s cooled off as well… or even on it’s own! You will probably get more out of these amounts than you need to top off the mousse, so keep a sterilized jar nearby to store the leftovers… or a spoon to deal with them right away~
If you’re going to serve it hot, add around 15 mins for this to your dinner plans.

1) Add the muscovado and the amaretto to a heavy-based pot and set it onto medium heat. Give the pot a little shake once every minute to keep the sugar from sticking to the bottom of the pot.
2) Once you see the sugar grains dissolving into the amaretto, pick up a whisk and help it along.
3) As soon as the boozy caramel turns into a smooth syrup, add the spices and turn the heat up to high.
4) Deglaze the lot with the the wine, give them a good whisk to make sure nothing’s still sticking to the pot and leave the syrup to bubble off the alcohol for 1-2 mins.
5) Turn the heat back down to medium and add the still frozen cherries.
6) To avoid breaking up the cherries more than necessary, lightly shake the pot from side to side every couple of minutes.
7) Depending on the individual baggie of cherries, you might suddenly be looking at a lot of liquid in your pot once the cherries have thawed. If that happens, use a slotted spoon to gently fish the cherries out of the pot and place them in a fine sieve.
8) Set the heat to high, to bring the liquid to a rapid boil, then turn the heat back to medium and leave it to reduce back into a thick syrup – a little runnier than runny honey is the consistency you’re looking for.
9) Add the cherries to the syrup again and leave it to simmer down some more – once the syrup coats the cherries in a sweet and gentle hug before it slowly oozes off, you’re golden.
10) If the liquids in your pot didn’t multiply, keep the cherries in while the syrup thickens up – just in case you notice the cherries starting to break up and melt in the heat, go with the evasive maneuver I just described – remove the cherries until the syrup is at the hug-and-ooze stage, then pop them back in to warm up again.
11) At this point, try to hunt down the spices in the pot without too much collateral cherry-damage. As a general law of nature, at least one of the cloves will beat you at this round of hide-and-seek – you will most likely spot it when you’re spooning the cherries onto your mousse, though.
12) Just before serving, take the chilled mousse out of the fridge and top it off with the hot spiced cherries and some of the syrup.
13) Add a dollop of soft whipped cream on top if you’d like and serve the mousse right away – while it’s almost as good with both parts of it being cold, that hot-and-cold contrast just adds that special something to it~ Yum! 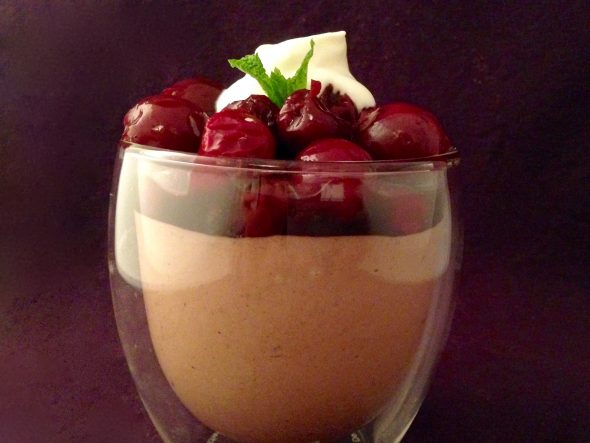 So, there you have it, combined with last week’s Chestnut Stuffed Duck & Cherry Chutney as a main dish, this dessert took us back to the Curral das Freiras, the Valley of the Nuns, on Madeira. A dinner to calm down that travel bug – trying to get us to book the next best flight back to Funchal – by conjuring up that all-enompassing sense of peace and contentment the whole island in general and that steep, rough, beautiful valley in particular gave us. I think, I’ve succeeded at capturing the culinary gist of that mindboggling dot on the map, covered in an almost central-european forest, hidden away on the “Island of Eternal Spring”, the “Pearl of the Atlantic Ocean”, Madeira.