Sometimes, mainly when you’re going about your day completely unaware of the concept that a random idea is about to set you off on an unexpected adventure, you may encounter a seemingly insignificant little thing that burrows deep into your headspace as soon as you try to put it away.

Like this little Tyrian recipe that gave me a headscratcher or two while on the journey of crafting a legendary focus in the wonderful world of Guild Wars 2. 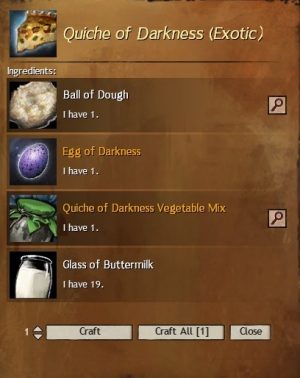 What does a Quiche have to do with a legendary harp, you might wonder? Well, I skipped that question and filed it under “Maybe Later”. For the time being, I was happily immersed in the adventure of going through the weapon’s stages of creation. Later that day, while I was prepping dinner to be precise, the general issue of a Quiche and a Harp in one package bubbled up to the forefront of my mind again – but again I didn’t actually get to linger on that line of thought for long. See, the foodie section of my headspace had evidently already started making plans without me, skipped over the missing link and had started to make a grocery list of dark and delicious things a “Quiche of Darkness” should be made out of. With a prep like that there wasn’t much more the conscious part of me could do than get its hands on an oven, refine the recipe and skip over a few experiment-hickups to present the final result to you guys~! Here we go:

The Quiche of Darkness Part #1 – The Dough
I’ve got 3 options for you guys today. The calorie-conscious dough, the not-so-conscious version and the cheaty gamer’s version.

1) Grab a large mixing bowl and add the starting-amount of 175g flour followed by the salt, dried herbs and baking powder.
2) Add the quark/curd, milk along with the walnut oil and nuts.
3) Knead into a smooth – well, smooth’ish, taking the nuts into account – and even dough, either with your hands or the dough hooks of your trusty handheld whizzing gizmo.
4) Roll the dough into a ball, wrap it in clingfilm and allow it to rest in the fridge for 15 mins.

1) Pick up a dough-appropriate mixing bowl and sift in the flour and 1 tsp of salt.
2) Pop in the butter cubes and very quickly work them into the flour with cool fingers – seriously, chill them under running water if you have to or the dough might become unmanageable halfway through the process.
3) Add 1 egg and have the dough hooks of your electrical whizz-o-matic take care of the rest.
4) Once the doughy lot has first turned into a blob and then into soft crumbles, gather them up with your hands and press, tuck and roll them into a tight ball.
5) Wrap it in clingfilm and freeze it for 12-15 mins – if your knifework for the filling takes longer than 15 min, transfer it into the fridge after the first 10 mins.

Option #3: The Gamer’s Version
Buy a roll of ready-made shortcrust/tarte dough. They even come in circular disks, fitted to the average tarte tin of 28-30cm DIA. You could consider dotting it with any/all of the herbs and nuts listed above… just a thought.

The Quiche of Darkness Part #2: The Filling
500g (maybe differently colored) floury baby potatoes, cooked, skinned, thinly sliced and cooled off – I settled on small, purple “Vitelotte” potatoes in the end. They’re deliciously potatoey and don’t melt into creamy dots of potato mash like other spuds I played with. They, like black salsify, beets and turmeric roots, have the fantastic ability to dye anything and everything they touch in violent shades of their respective color, so snap on a pair of CSI gloves before picking up the peeler.
Opt: 1 Purple Carrot, peeled, sliced into thin disks and blanched – the farmers at the potatoes & roots stand on our Farmer’s Market always give off a certain “alternative” vibe, but even considering the turbulent times we find ourselves in right now, I did raise an eyebrow or two when they offered me a “Bunch of Purple Haze” to go with the purple potatoes… Turns out that’s actually the name of the purple carrot variant with the orange center, though.
1 Red Onion, sliced into very thin half-moons
4 medium-sized Happy Eggs
1 small precooked Beet, sliced into thin half-moons
175g Crème Fraîche or Crème Légère
100g Low Fat Cooking Cream
1 generous pinch each of Pepper and Nutmeg
3 Tbsp Thyme Leaves
1 Tbsp Rosemary Needles, finely chopped
2 Cloves of Garlic, very finely chopped
180g Goat’s Cheese Gouda – I keep thinking that this might be the perfect recipe to try with the full brunt of a blue cheese for those of you who like the stuff… you might want to reconsider the amounts, though, I can see the blueberries loosing a lot of ground to a cheese hammer like Roquefort or Stilton
150g Blueberries – fresh ones, don’t. Use. Frozen. Ones. Unless you want your crispy tarte to turn into a soppy custard
Fresh Rosemary on top

1) Take care of the potatoes early enough – I usually do something potatoey the evening before and set 500g aside for this one to be used the next day.
2) Preheat your oven to 200°C.
3) Roll the dough out into a disk large enough to cover your tarte tin and its rims between 2 sheets of clingfilm.
4) Using your rolling pin as lever, remove the clingfilm, move the disk onto/into the tin and use a small ball of dough to gently and snugly fit the dough into the tin, nooks, crannies, corners and waves included.
5) If you’re going with the gamer’s version, fit the dough into the tin and be done with it.
6) Clean up the occasional overlap hanging off of the top of the rim with a very sharp knife.
7) Prick the surface with a fork a couple of times to prevent it from bubbling up OR: fit a sheet of baking parchment to the surface and weigh it down with an equally size-fitted muslin bag filled with coins.
8) Blind-bake the dough for 12-15 min until it turns a delicious golden-brown.
9) Meanwhile, whisk the cream, crème, spices, garlic and eggs together in a small mixing bowl until everything is well combined.
10) Retrieve the tin from the oven and place it on a heat-proof tile or boar you can also use later on to maneuver the filled tin back into the heat. Remove the blind-baking helpers if you’ve used any.
11) Turn the heat down to 180°C.
12) Arrange the potatoes in visually appealing circles until the base of the tarte is covered.
13) Wedge the beet slices, flat side down, behind the potatoes along the rims like a pretty little fence, lightly overlapping eachother. I initially did this because I knew one person at the table that night hated beets with a raging passion and this way they could be easily spotted, picked out and summarily thrown out the window. The unexpected side-effect of that strategy was a surprisingly pretty dot on the visual I of the whole shebang. Score~!
14) Crumble the cheese on top and dot everything with the blueberries.
15) Pour the egg mixture on top and transfer the tin back into the oven.
16) Bake the quiche for 55-60 mins until the surface has set – it may look wetter than it is, a little shake-and-jiggle with a glove-protected hand will help you with that.
17) Once it’s there, place the tin on a cooling rack and allow the quiche to cool down for 5-10 mins before slicing it up. Serve it with a pile of greens and a lemony vinaigrette to dot the i on that one~!