These little balls of happyness are one of my favorite types of chocolates for several reasons. They are really quick to make, they’re actually healthy and they don’t involve too much chocolate. I came up with these a couple of years back, after the christmas holidays. Hubby is a chocoholic, if there’s chocolate in the house, it’s as good as gone already.

Sometimes he’s not too happy about that, and, like probably everyone with a tendency not to stop after a small piece of chocolate, he decided to skip sweets altogether for a while. One evening he eyed me munching on a dried fig for dessert. „I wish that would do it for me. They’re sweet enough, but… meh“ Hmm. Well, I should be able to do something about that! I know, while he likes dried figs, he never eats more than 1 or 2. No chance at glutting himself on those. How about just a tiny bit of chocolate to make them qualify themselves as a „Sweet“ to him? After juggling around a couple of ideas I came up with these: 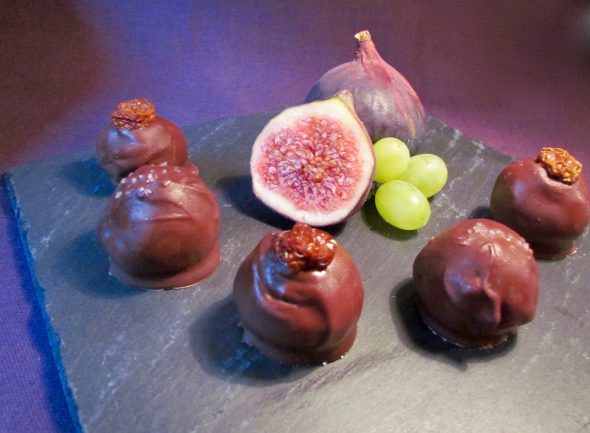 For about 20 pieces you’ll need:
200g dried Figs – the simple variety, naked if you will, not the candied ones
150g dried Soft Figs
1 Tbsp 100% Almond Butter – I always get this one in an organic food store, most normal supermarkets only sell the peanutbutter-like breadspread or almond-flavored chocolate breadspread
100g 85% Chocolate
50g Milk Chocolate
Opt: 1-2 Tbsp Water
Fleur de Sel and/or dried Cape Gooseberries

1) Remove the gnarly stems, finely chop the figs and place them in a mixing bowl. The soft ones are a bit messy to cut, but you’ll be taking care of stubborn bits sticking together by kneading the „dough“ in a bit. The reason for the two types of figs is easy: the „normal“ dried (as in dessicated) are just too hard and dry to stick together. The soft ones alone don’t keep their shape either. The combination of both works best to keep them in shape and provide different textures, adding some depth to the whole deal.
2) Mix the figs with the almond butter. Now, initially I used the almond butter as a binding agent – my first experimental batch had a lot more dessicated figs in it than soft ones. Even after adjusting the fig ratio I stuck to the dollop of almond butter though, simply because it really adds a whole new layer of flavor. Knead or work the dough with a rubber spatula until everything is evenly distributed. If it’s too dry or crumbly, add a bit of water as you go. To test the consistency, pick up a knob and roll it into a ball. If it just keeps it’s shape while having a glossy surface, you’re golden.
3) Set the mixing bowl aside for 15-20 mins to set. What may have seemed just a little too wet should have firmed up nicely now. If it’s turned crumbly, add a bit of water and repeat the process.
4) Melt the chocolate in a waterbath – a bowl set on simmering (not boiling!) water, not touching the surface of the water. Once it’s completely melted, set the bowl aside and leave the chocolate to cool down to room temperature. In this case the temperature of the chocolate is crucial since the surface of the filling is very smooth and maybe a little slippery. If the chocolate is still too hot and liquid, it might just slide off of the filling.
5) Line a tray with a sheet of baking parchment.
6) Divide the fig mixture into 20 similar sized bits and roll them into small, firm balls. I usually wear CSI gloves for this, it really is a rather sticky process.
7) Use a pâtisserie fork (a miniature trident, if you will) or a simple dessert fork to roll them through the chocolate, evenly coating them one by one. Tap them on the rim of the bowl to make excess chocolate drip off. I usually place a chopstick across my bowl to tap my fork on or drag it across to avoid wasting the chocolate firming up on the rims of the bowl. It also makes less of a mess.
In case your chocolate decides you’re not working fast enough and starts resisting the objective to coat the filling evenly, pop the bowl back onto the waterbath.
8) Set the chocolates onto your tray one by one. Factor in dripping chocolate, moments of goofy-esque lapses in hand-eye-coordination and shere bad luck to determine the space you need to leave between them. If the fork has left marks on the visible surface, use an extra drop or two of chocolate and the back of a teaspoon to iron them out.
9) Sprinkle them with a couple of Fleur de Sel flakes. If you’re going with the gooseberries, sprinkle your baking parchment with a few salt flakes before setting the chocolates on top. Believe me, the flakes make a huge difference! They counteract a little of the bitter cocoa solids in the chocolate and they boost the flavor of the figs to a whole new level. Just a few crystals per portion is enough to give the chocolates a lift.
10) Let them set at room temperarure until the chocolate has firmed up enough for you to carefully move them into an airtight container – really, make sure it’s airtight, the chocolate as well as the filling are just too happy to take on aromas surrounding them (on that note, make extra sure the container doesn’t have a funny odor to it either – by rushing it I once accidentally picked up the container I reserve for garlic-related things ever since a garlic sauce had burned itsself into the oh-so aroma-proof plastic of the click-and-lock box… not a pleasant experience. At all.) Keep them chilled in the fridge until serving time.

Dried figs, like other dried fruit, have a low „glycemic index“, meaning their sugar doesn’t shoot right into your bloodstream, making the blood sugar levels spike in the process. This generally translates to: they keep you full and satisfied for a longer time than any other sweet would since they don’t hassle your metabolism as much.

I know, I said there’s no such thing as guilt-free chocolates, but these are actually getting quite close! Yay for healthy, not-so-chocolatey-chocolates. Just don’t go binge-munching on them… Enjoy~