Like I’ve hinted at in last week’s stock-101, I’ve recently spent a lot of time in the kitchen, refining and educating my soup-skills. One of the soups off the Tyrian menu demanded my attention right away – first and foremost because I’ve always liked it but never actually made it myself and secondly because it fits into springtime perfectly, at least in my opinion: A light and creamy Potato & Leek Soup.

So this Tyrian Original was what got me going down that road:

Potatoes and Leeks – a classic combination in a lot of european cuisines, all of them claiming to have cooked up „the original“. Every region adds their signature ingredients and, in my book, every one of them is an original of sorts. My version took me a while to get right. On one hand I had this memory of an old friend of my granparents chopping her way through what seemed like a truckload of leeks before throwing 1 small potato to the mix following a traditional alsatian recipe. On the other hand, more modern recipes seemed to favor potatoes over leeks or a 50:50 ratio. I decided to start with what I knew I liked and dug up an old and battered family hand-me-down alsatian cookbook for reference. Yep, 1kg of leeks and 100g potatoes, my assessment of the leek situation as a five year-old wasn’t that far off, who would have thought. The rest of the recipe was a real head-scratcher though (duck fat and milk? I don’t think so…). So I skipped the research and simply cooked a batch of potatoes and a batch of leeks and started mixing and matching until I was satisfied. This was the final result:

This makes 3-4 servings as starter

1) Thoroughly rinse the potato cubes to remove the excess starch gathering on the cutting surfaces – it could turn the whole thing a bit… sorry, there’s no better word for it: slimy. Set them aside in a sieve to drip off.
2) Melt the butter in a large pot set on medium-high heat and sautée the shallots and potatoes for 7-10 mins until the shallots turn translucent.
3) Add the leeks, give the veggies a good stir and simmer them for 5 mins. Leeks loose a lot of color and flavour if they are cooked too long, so give them some extra care during prep in cutting them into really thin slices. Fresh leeks pack quite a punch though, so apart from a little loss in color, it still tastes delicious the second time around.
4) Stuff the herbs into a large teabag and tightly tie it off with a bit of butcher’s string. For a fuss-free removal of the bag, tie the other end to the handle of the pot. Add the teabag to the veggies and pour in the stock.
5) Let the contents of your pot come up to a boil. Once the soup is bubbling away, reduce the heat to medium-low and wait until it’s calmed down to a gentle simmer.
6) Add the milk and cream to the mix and leave it to simmer for about 7-10 mins until the potatoes are soft, almost dissolving in the liquids.
7) Remove the teabag and move the lot into the jug of a blender – or leave it in the pot if you’re using a stick blender. Leave it to cool for a couple of mins, then blitz it until it’s smooth. Don’t overblend it, though, you’re basically just looking to break up the solids, not to liquefy them.
8) Strain the soup through a fine sieve or with the help of a soup-strainer back into the pot. 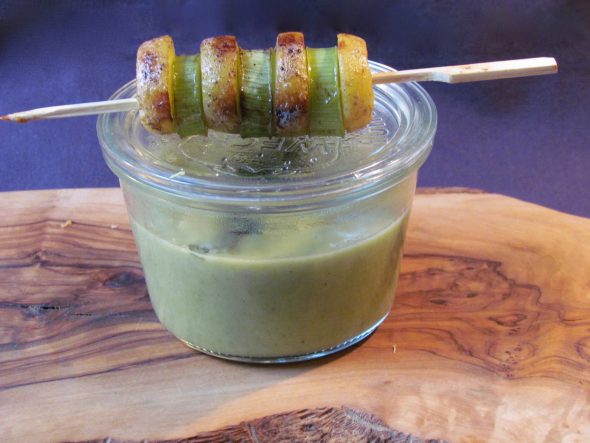 I think, after re-discovering the fun in making soups during the soup-bootcamp I put myself through, I will look into aquiring one of those nifty strainers after the summer months. You might have noticed the 2 different presentations in my pictures – I had planned to advertise the soup’s versatility, tell you how easy it is to fit the style and presentation, rustic or refined, of it to occasion and preference, but even if I hadn’t had that on my agenda already, I would have had good reason to think about it during the process. I used around double the amount of the ingredients I listed above, what with it being experiment-time and all, and my arms started to get tired and achey from my attempts at convincing the soup to move through my very fine sieve after about half of it. So I ended up with 2 large batches of equally delicious soups, one with a little bite to it, the other one as smooth as silk – thanks to the ridiculously fine sieve and sore muscles extra smooth and absolutely perfect without an extra dot of cream or crème fraîche. We kept the unstrained batch for lunch the next day and it worked out perfectly although it thickened a bit over night (not quite a purée yet, but some of you might prefer to add a bit more stock rather than have at it with a large slice of fresh rye sourdough bread…). I should mention though, the leeks I used were young, small leeks, fresh from the field. Since I’ve used „normal“, large ones for several other dishes I can’t help but suspect that using those for the soup, fibrous as they can be, might not net you the same results – the unstrained soup might end up grainy or stringy.

9) Set the pot on medium-low heat and let it warm through. It will thicken up a little at this stage. If it turns out too thick for your liking, stir in a little more stock. If it ends up being too thin, whizz up 3-4 tbsp of the soup with a slice of cooked potato and stir it back in or dissolve 1 tsp of cornstarch in cold warter and add it to the soup.
10) Have a taste and adjust the seasoning with salt and cayenne pepper.
11) Froth the (strained) soup up with a stick blender just before dividing it into warmed bowls. Trying to froth the unstrained soup might redecorate the front of your clothes as well as your kitchen, but won’t do much for the soup itself.
12) Garnish the bowls with the sorrel ribbons and serve while it’s hot~

If you’re close and comfortable with both leeks and potatoes you probably know that a bit of acidity really lifts them to a new level. In this case the garden sorrel is doing that job, that’s why there’s no vinegar or citrusy stuff in my list of ingredients. Why garden sorrel? Well, I needed a reason to use it! I have a small pot of sorrel growing on my windowsill but I’ve never really had the chance to use it outside of salads, so when I was trying to figure out a way to get some acidity into the soup without being too aggressive about it, it clicked. The alsatian cookbook I mentioned earlier had a potato & sorrel stew listed, so at least in 1927 that combination appears to have worked. I gave it a try with a thin slice and another…and another… I added 2 large leaves to my soup and set the poor plant back on my windowsill to keep me from munching my way through all of it. Ah, the bliss of something working out better than you could have hoped for…