I’m aware you guys might not think of a bowl of granola or muesli when someone drops the term „Trail Mix“ on you, but seeing this one, or rather the ingredients listed in the recipe, at the Chef’s Station immediately made me think of my personal blend of seeds, nuts and dried berries that has been playing an important role in our regular diet for years now. Like its Tyrian counterpart, my blend places the blueberries, sour cherries, walnuts and almonds at the front and center of the stage, highlighting the rest of the blend with intense flavors and contrasting textures. While hubby usually munches on a handful of this with some milk or yoghurt in the morning, I sprinkle a couple of teaspoons over a bowl of fruit every once in a while, as a kind of seasoning for a fruit salad, if you will, or have a few pinches when I’m feeling a little peckish… just because. So, you see, it’s actually closer to a trail mix than one would expect at first glance~!

At some point, tired of the oversugared compilation of chemicals passing for cereal these days, I decided to put together my own mix of my favorite nuts, seeds and berries to satisfy my breakfast-related needs. After playing around with various ingredients, I’ve settled on this one, crunchy, fruity, really healthy and truely yum~!

I usually include toasted and honey’ed oats in the mix, what with it being a granola mix and all that. Coming back home from my ingredient-hunting-trip one day in early spring however, completely soaked through and with a minor case of frostbite, I had to discover that I had, of course, neglected to pick up the oats. Eyeballing the skies outside, still dark gray and angry, a while later, I decided the oats could wait until I wouldn’t need a set of scubadiving gear to ge to the store. Needless to say, that didn’t happen until the next morning. Hubby, oblivious to the absence of the oats at first, dug in with relish. A raised eyebrow later, we discussed the effect of the oats, pro’s and con’s, on the blend in general and decided on… not deciding on one blend over the other, but on keeping one half of the batch, oatless as it was, as a snack in the general sense of a trail mix, and add oats to the other half to complete the picture of a yumtastic breakfast muesli blend. I’ve stuck to that strategy ever since that day.

So here goes, my verion of the Tyrian… 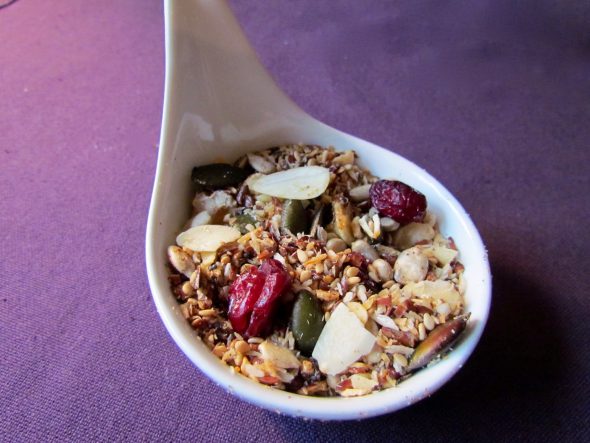 50g Poppy Seeds
50g crushed Hazelnuts
300g Sunflower Seeds
200g Pumpkin Seeds
150g White Sesame Seeds
100g Black Sesame Seeds – these are a bit harder to find than their white counterparts, I always buy mine at an Asian Food Store. If you can’t get your hands on the black ones, replace them with white seeds.
400g dessicated Coconut Flakes
250g Flax Seeds
200g blanched Almond Sticks or Slices
200g dried Blueberries or Cranberries – dried blueberries are obscenely expensive and hard to get here, so I use cranberries more often than blueberries. Blueberry-juice-infused cranberries work too, if you don’t mind that they’ve been tampered with…
200g Dried Cherries
200g Walnuts
Opt: 300g Rolled Oats
Honey
Cinnamon
Salt

By the way, if you keep the berries seperately, this one has a very long shelf life, given you’re storing it in an airtight container, so the amount isn’t quite as insane as it sounds.

1) Toast all oats, seeds and nuts type by type in a dry heavy based pan on medium heat until they’re nicely golden and crispy. Keep the walnuts at the bottom of the waiting list. You’ll need to pay some extra attention to the proceedings in your pan when you get to the walnuts, so it’s best to pop them into the pan after everything else is done.
2) Lightly dust each batch with some cinnamon and a little bit of salt, while it’s still in the pan. Give the pan a hearty flip to evenly distribute the cinnamon and salt before turning the current batch out on a large tray lined with baking parchent to cool off.
3) Drizzle the oats with 2-3 Tbsp of honey on their turn. If you’re leaving out the oats, drizzle some honey over the walnuts and almonds on their turn.
4) Turn the heat down to low and let the pan cool down before adding the walnuts. This will take a bit longer than the other seeds and nuts, but the skins of the walnuts just burn way too quickly if you toss them into a really hot pan.
5) Add the dried fruit to the blend once everything is cooled off entirely – actually, if you don’t eat a bowl of cereal or muesli every day, if this batch is going to last you more than 2-3 weeks, I’d like to advise you to keep the dried fruit in an extra container nearby. The other ingredients will draw the moisture out of the fruit will dry them out, turning them into gnarly, chewy bits over time, while the rest looses some of its crunch.
6) Carefully stir or fold your roasted ingredients and the dried fruit – unless you’re keeping them out for the time being – into an even blend, and pour it into an airtight container. This, sans fruit, will stay crispy and yummy for about 7-8 weeks – maybe even longer, thats just the longest period of time it took us to finish up one of these batches.
7) Other possible additions, tried and tested: dark chocolate drops for the sweet tooth or unsweetened, puffed rice to fluff up the mix a little. 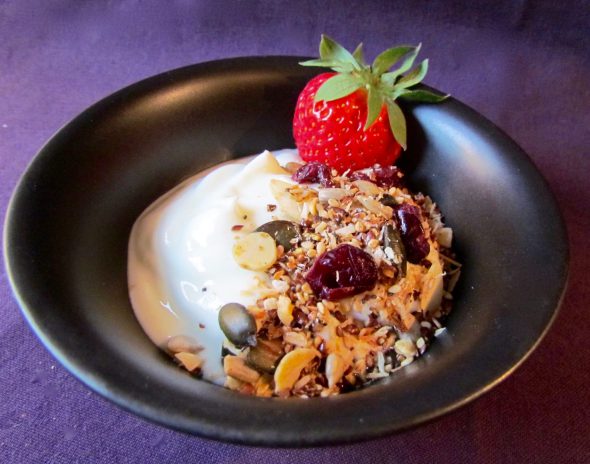 I hope, you guys like my twist on Tyria’s Trail Mix and give it a try!