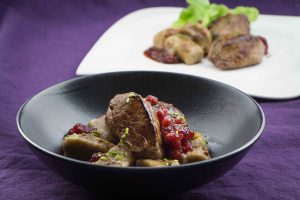 As usual, when there’s a new event, festival or chapter of the living story sending the adventuring lives of Tyia’s citizens spinning, hubby and I all but lock ourselves in and enjoy a proper gaming-spree. Our adventures through “A Crack in the Ice” however was rudely interrupted by me running off like a headless chicken, sent on a delicious mission by the Winterberry Bushes dotting the Bitterfrost Frontier and the related “Steak and Winterberry” recipe a friendly Quaggan sold us to go right with the freshly harvested berries.

I suppose, I should elaborate… In our corner of the world, there’s only one kind of berry fitting the “Winterberry” description. The humble and appallingly underrated cowberry or lingonberry. 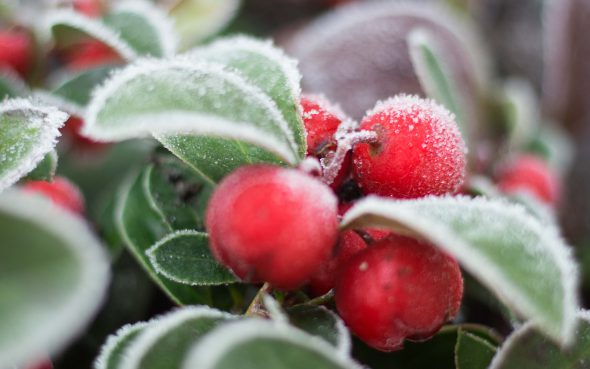 Here’s a bit of foodology on these beauties~
A true powerhouse in the nutritional-values-department, these beauties don’t just grow during the early colder months of the year, easily shrugging off a few hits of frost until december, they also provide us with everything we need to get through the season in one, healthy piece. They pack vitamins A, B and C in abundance, as well as potassium, calcium and magnesium, all of which are a bit harder to come by during winter – let alone all in one place. Of course, like most red berries, they’ve found their way into traditional medicine, homeopathic treatments and modern cancer and anti-age research. Grandma’s stash of household remedies, for example, always held an insanely sweet cowberry syrup to be used for anything on the inside asking for an antiseptic or soothing treatment, from a sore throat to tummy aches and high fever.
Due to their late arrival, they are a major player in our traditional autumn and winter cuisine, holding a prime position as an accompaniment for anything game, mushroom, root and otherwise forest-related. So, of course, the Quaggan’s recipe sent me running to the hunter’s stall at the farmer’s market, in search of playthings for this yumtastic Tyrian dinner.

Here we go, one true winter-classic in the foresty areas of south-western Germany, brought on by a shrub of “Winterberries” in Tyria~
Just on a side-note, if you would go looking for something similar to this one in grandma’s kitchen, you would probably find a heavy, sunday-roast-style kind of dish, a very slow-roasted hunk of meat, heavy potato dumplings and all the fixings. My version here, minus the Gnocchi – unless you cheat by using storebought ones~! is a real quick fix while being healthy and nutritious.

The Chestnut Gnocchi
Well, like I said, the Gnocchi are basically the only part of this dish taking up any amount of your time, so get these out of the way – for the most part – before firing up the pan for the venison. You might end up with more Gnocchi than you need or want for this dish due to the one egg being the end to any amount-reducing attempts. The good thing about these pretties: Gnocchi are freezer-friendly. You can freeze them, preferably precooked, and pop them into the next best sauce you’ve got at hand at a later point.

1) Place a large pot with a fitting lid on medium-high heat, add the potatoes and pour in just enough water to cover them.
2) Add a generous pinch of salt and cook the potatoes for around 20-25 mins until they’re soft with the lid closed. Check on them from time to time and add a bit more water in case the potatoes are too quick to soak it up.
3) Add the stock and butter – or the cream – to a second, smaller pot set on high heat and send the chestnuts swimming in it.
4) Bring the lot to a boil, then reduce the heat to medium-low once they are merrily bubbling away.
5) Give them around 8-10 mins and check on their consistency. They should be tender and creamy once you bite down on a piece.
6) Tip the potatoes into a colander once they’re done and leave them to steam off for 5 mins. In case they still seem to be on the wet side of things after that, pop them back into the pot, turn the heat to medium and swirl them around for a couple of minutes to help the process along, losing as much excess moisture as possible. Be gentle with them at this point, otherwise they’ll quickly break up and make themselves a sticking-and-burning nuissance.
7) Once they are as “dry” as a cooked potato can feel to a gentle touch, press them into a large mixing bowl with the help of a ricer. If you don’t have a ricer, use a large fork to turn them into a fine, lump free mash – just don’t use a blender or food processor for this step – whizzing them up that way would turn them into a sticky sort of potato glue.
8) The chestnuts, however, don’t care much about how exactly they’re puréed, so simply drain off the cooking liquids and whizz them into a silky purée with a stick blender or food processor before adding them to the potatoes.
9) Add the egg yolk, nutmeg and vanilla seeds to the bowl as well, sift in the flour and get to work, kneading the lot into a smooth, non-sticky but soft dough. The best way to avoid a major mess is to treat the dough as if you were trying to fold dry ingredients into a whipped cream kind of mixture.
10) Dust your hands with a bit of potato flour, tip the bowl for easy access and let the flour-covered dough slide over the palm of your hand until the flour works its way into the yet-sticky potato blob.

11) Season the dough with salt and pepper as you go.
12) Don’t go squeezing or energetically kneading the dough at any point unless you wish to aquire a nice, sticky and fragrant potato-skin. Believe me, getting rid of this one once it has settled between your fingers is one hell of an exercise in patience.
13) Once the dough starts coming together in a soft, smooth ball, leave it to rest for 30-45 mins.
14) As soon as that time’s up, tip the dough out onto a work surface dusted with potato flour.
15) The dough should be firm enough to be shaped without sticking to the surface – or you. If that’s not the case, work in some potato flour. It’s possible to overdose on the potato flour, but unlike a normal grain flour, addining too much of it doesn’t render the result inedible. It does turn the finished Gnocchi a little chewy, but it doesn’t make them taste like dusty, chewy, grainy blobs of wet flour.
16) Divide the ball into 2-3 portions and gently roll them into 2-3cm thick logs with flour-dusted palms.
17) Leave the logs to rest for anther 10 mins in a cool spot, then slice the log into small, Gnocchi’ish pillows.
18) Line a large tray with a sheet of baking parchment and dust the surface with the polenta.
19) Roll the proto-Gnocchi across the back of a fork to mark them with sauce-soaking grooves and place them on the tray.
20) In the big picture of this dish, this is the perfect time to take care of the venison and the sauce~ Once the meat is resting and the sauce is simmering down, it’s time to finish the Gnocchi in order to get everything onto a plate at the same time.
21) Bring a pot of salted water to a gentle simmer. Gently slide the dumplings into the water one by one.
22) Cook the Gnocchi in batches until they float up the the surface of the water – around 6-8 mins should do it, have a taste to be sure, though. While they don’t exactly tell you when they’re done, they do have a nasty way to tell you once that point in time has passed… they break apart and turn into a soggy purée, so have that test-bite about 5-6 mins into the process.
23) Take them out of the pot with a slotted spoon and store them in a bowl covered with a kitchen cloth until you’re done with all of them. 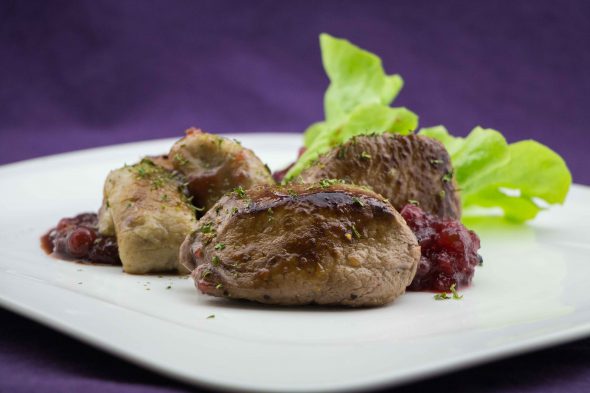 1) Remove the steaks from the fridge 30 mins prior to pan’o’clock.
2) Set a heavy-based pan onto medium-high heat and add the butter.
3) Pat the fillets dry with a paper towel and generously season them from all sides.
4) Once the butter has dissolved and the pan has caught up with its temperature-orders, gently slide in the steaks.
5) Leave them to sit in the heat for 45 seconds, then drizzle each of them with 1 tsp of honey before flipping them over for a 30-second sizzle on the second side.
6) From this point on, flip the pretties every 15-20 secs for a total of 3 mins per steak – so, 5-7 flips after the initial 2 sizzles should net you with a beautifully rosé, medium venison steak, surrounded by a crispy, caramellized “skin”.
7) Move the steaks to a resting-plate and cover them with a blanket of aluminum foil. Keep them in a warm spot until you’re ready to serve.

The Cowberry Sauce
100ml Venison Stock
200ml Red Port
2 small Shallots, finely chopped
1 Pinch of Hot Chilli Flakes
4-5 heaped Tbsp of preserved Cowberries
Salt, Pepper
1 Teabag of Venison Spices:
I always have disposable tea filters stashed away in my kitchen for this kind of thing – much like tieing up a bunch of herbs, using a teabag for loose spices spares you quite some time and effort you’d waste trying to fish out every bit and piece of scattered spices throughout the sauce or soup in front of you. If you don’t have reusable or disposable teabags, tightly tie the spices up in a square of musslelin or a thin cheesecloth – or strain the sauce through a fine sieve to remove every swimmer.
1 dried Porcini Mushroom
10 Peppercorns
5 Allspice Berries
3 Juniperberries
2 Cloves
1 Tsp Coriander Seeds
½ Tsp Mustard Seeds
¼ Tsp Cinnamon

1) Add the shallot cubes to the pan you’ve just used for the venison, lightly season them with salt and pepper and give them about 2 mins to soften up a little. Stir occasionally to keep them from taking on color in the process.
2) Deglaze the pan with the port.
3) Once the rapid bubble has calmed down, pour in the stock and use a spatula to whirl up all of the delicious roasting juices and incorporate them into the liquid.
4) Pop in the chillies and chase them down with the teabag.
5) Cover the pan with a lid, turn the heat to medium-low and leave the “tea” to infuse the sauce for 5 mins.
6) This little “break” would be a good time to get the Gnocchi-pot onto the stove~
7) Remove the lid and the bag, turn the heat to medium-high again and stir in the cowberry preserve.
8) Leave the sauce to reduce down and thicken up for a couple of minutes – this shouldn’t take much more than 3-4 mins with these amounts.
9) Have a taste once you’re satisfied with the consistency and adjust the seasoning with salt, pepper and more cowberries.

Assembling the Dish
1) Divide the Gnocchi onto two plates.
2) Give the steaks a quick turn in the sauce and gently place them on top of or next to the dumplings.
3) Cover the lot with the sauce and serve immediately.