Did anyone say “Heresy” and “open fire” in one breath? Welcome to the dark ages… or our latest garden showdown! I, carnivore, have come up with something other than the usual, extremely (at least to me, comparing the choices to what’s on the other side of the coals) boring “vegetarian options” to throw on a BBQ. Something that even my fellow lovers of a decent steak or burger have taken a serious liking to by now. A veggie burger pattie that doesn’t involve funky tofu textures, the ever present – tasty, but… again?! – feta & greek stuff combo or squeaky halloumi~!

You see, every time I scan a menu at a restaurant or event and hit the vegetarian options, I have to stifle a yawn. Don’t get me wrong, you guys know I’m a fan of vegetables. Thing is, during the week at least, vegetarian meals are basically the standard while meat’s celebrated on weekends. Since I hate eating the same thing over and over again, my veggie repertoire is quite big and, since it’s “normal” to me, it’s something I wouldn’t pay for at a restaurant. When I eat out, or make a fuss about a meal, throw a BBQ party for example, I want the food to be exciting and out of the ordinary. That’s why most of my main dishes here involve meat, and grilled veggies, tasty as they might be, don’t count as something I would even think to go to a garden party for. Anyways, the same yawn-effect hit me square in the face when I encountered the Veggie Burger hidden away in the Chef’s Guild’s delicious Burger Menu.

At that moment, I felt truly sorry for vegetarians around the world. Normally I’d say they chose a lifestyle, now they have to live with it, but a leaf of lettuce, a shroom and a tomato? That’s just sad… So. Something, healthy, “real”, delicious, meat-free but BBQable and desirable for carnivores as well? Challenge accepted! Whenever I’m on a quest for fantastic vegetarian options, my first impulse is to snoop around middle- to far eastern cuisines. Northern African to Indian, and most of the Asian cuisines treat meat as the side dish to a pile of deliciously prepared veggies rather than the other way around – and they’re also the only ones who use tofu in a good, non-meat substitute’y way, but that’s a whole new can of worms I’d prefer not to open. This time however, I didn’t have to go that far. I actually didn’t even have to leave my own country in that regard, at least not for the base ingredient <insert drumroll here> Greenspelt! – spices, of course, are always a horse of a different color~ In case you’re taking a mental step back at this point, rest assured, I did too at first. I watched some guy on TV talking about using uncooked greenspelt for a falafel-thing and… switched channels. And years later, that idea came back around to bite me, so I gave it a shot and it turned out way WAY better than I could have hoped~! A couple of tweaks and experiments later, hubby and I arrived at this final recipe for 4 yumtastic Veggie Burgers. 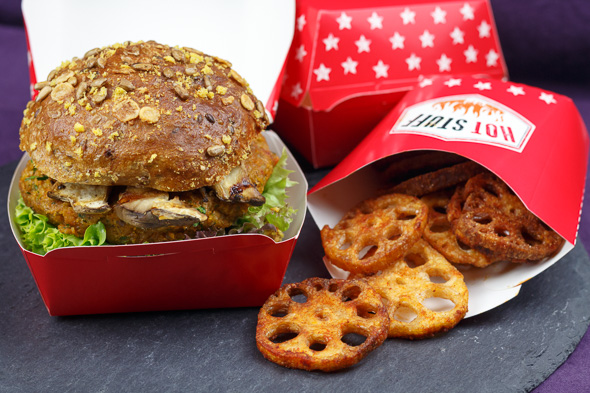 The Greenspelt Burger Patties
Just for the record, the patties, given a different shape, also work deliciously well as falafely, spicy balls on top of a salad or as a keyboard-safe Gamer’s Weekend midnight-snack~

1) Shred the uncooked spelt grains with a few pulses of your food processor until they’re roughly the size of coarse sea salt grains.
2) Transfer them into a sealable container and pour in the vegetable stock. Add a pinch of salt, seal the lid, stash the container out of harm’s way and allow the spelt to soak up the stock for about 6 hrs.
3) Once that’s done, place a wide pan on medium heat and lightly sauté the onion cubes until they start to turn translucent. Take the pan off the heat and tip the onions into a wide mixing bowl.
4) Add the freshly grated cheese, sun-dried tomatoes, soaked spelt shreds and eggs and thoroughly stir the mixture until all of the ingredients are very well combined.
5) In a second round, add the freshly chopped herbs and garlic and season the lot with salt, pepper, nutmeg and paprika powder. I know, I’ve said this before, but “don’t be shy” with the seasoning, like all grains, spelt soaks up a lot of it.
6) Snap on a pair of CSI gloves (paprika. Red. Very quick to work it’s way into your skin.) and knead through the mixture like you mean business for about 3-4 mins, then ditch the gloves, grate in the bread/sprinkle the heap with the panko crumbs and, with the help of a spoon or spatula, fold in the crumbs until they’re well incorporated, yet not squished into the “dough”.
7) By the way, you can go through the usual taste-and-adjust routine at this point, the mixture is perfectly edible already, sans the crisp, of course.
8) Once you’re satisfied with the seasoning, cover the bowl with a sheet of clingfilm and leave the mixture to soak for 1-2 more hrs.
9) The time needed for the second round of soaking depends on the “rollability” of the dough. Pick up a roughly golfball-sized knob and try to roll it into a tight ball.
– If the spelty mixture is too dry and crumbly to stay in place at this point, add an egg and give it 30 mins to set before giving it another go.
– If the mix is too wet to agree with your idea of a ball-shape, add a sprinkling of breadcrumbs and try again after a 30 min rest.
10) Once the “dough” is done, divide it into 4-6 portions – depending on the DIA of the buns you’ve picked for the gig, and shape them into burger patties. Or roll them into walnut-sized balls if you’re using them as fingerfood/salad toppings.
11) Have the pitmaster of your BBQ treat them like any other burger pattie – or a bit more on the gentle side of things, just in case… – or pop a griddle onto high heat after brushing it with a light layer of oil.
12) Since they’re already “done” per se, simply fry them just long enough to allow them to develop a nice crisp on both sides.
13) time to take care of the rest of the burger-assembly-line~!

The Yoghurt Sauce
When it comes to yoghurt sauces, be it for a salad, a burger or a meatball kind of scenario, I don’t actually follow the same line each time – my pick.of-the-day always depends, aside from the dish it’s supposed to support, on what I have in the fridge along the lines of a dairy base and how much “Summer” I feel like adding to the dish in question. So, here are the three tried-and-hubby-approved yoghurt blends fitting these veggie burgers nicely.

Well, what can I say… all three of them are prepped the same, they follow the simple notebook-one-liner I can’t, for the life of me, turn into something more elaborate or sophisticated-sounding. So here goes nothing: 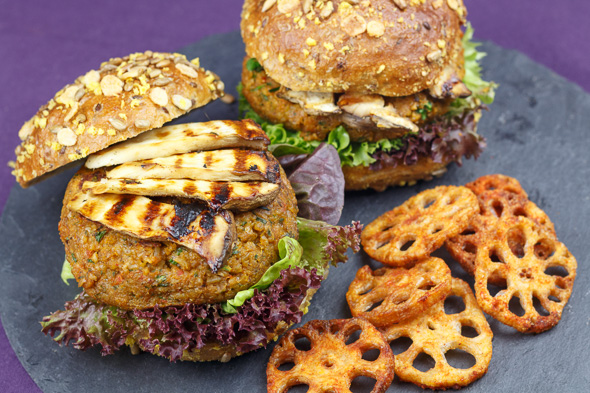 The “Others”
8 Gem Lettuce Leaves, roughly broken up or very thinly sliced into ribbons
1-2 Oxheart Tomatoes, thinly sliced – make sure every bun gets 2-3 slices
100g King Oyster or Portobello Mushrooms, thinly sliced
1 Tbsp of Extra Virgin Olive Oil or Melted Butter (see below~)
Salt, Pepper, Nutmeg, dried Rosemary
Opt: Lotus Fries – I always make these – huzzah for kitchen-work on auto-pilot~! – when there’s burgers involved, and I always forget to mention them when I share the recipes with you guys, so I had hubby include them in this particular photo-session to remind myself of shining a spot on this humble hero in the side-dish corner. And guess what… until I arrived at the “clean up post and prepare to publish it” stage, I… forgot about the silly fries again. I think a separate Lotus Fries recipe with lots of dips or something like that is in order very soon, but until then, you can find my much (ab)used, beloved, simple yet absolutely yumtastic, cook-on-autopilot Lotus Fries Recipe here.

Before you get started, you’ll have a decision to make. A simple one, but still. Fry or not to fry the shrooms or rather, toss them onto the BBQ for a quick blink or not. I know several people who don’t fancy eating any sort of mushroom raw, so I always give them a couple of minutes in the griddle – yes, the griddle even though the BBQ is running, simply because I prep them in advance along with everything else in order to keep the BBQ from overcrowding when the guests arrive.
So, if you don’t want to go raw, you could…

While we’re on the topic of mushrooms… I made these Burgers with giant portobellos to replace the buns at one point… rather messy-to-eat results but very delicious~ Memo to self: Add bibs to shopping list next time. And practice before eating that one in public again.

4) Place the mushroom, lettuce and the tomatoes in separate bowls for easy access and get ready~!

Assembling the Burgers
4 Brioche Buns, Sourdough Rye Rolls or whatever else kind bread-kin you want to use to hold your fillings in place
Alt: 8 Giant Portobello Mushrooms, stemmed (and 4 Bibs.)
Opt: Gimmicky Burger and Fries Boxes for whimsical eye candy – check your local garden supply center or home decoration/party supply stores during the summer months. I suppose you can easily find them online too, but until I came across these in the garden center while hunting something entirely different, I would have never even thought of  using those… let alone known (how) to search for them.

1) Spread a tsp of the yoghurt sauce across the cutting surface of each bun’s bottom half.
2) Using the yoghurt as sort-of glue, arrange the lettuce leaves/shreds on top.
3) Place the greenspelt patties on their respective lettuce beds and add another teaspoonful of yoghurt sauce on top of each before lidding them off with the tomatoes.
4) If you really need more cheese – because there’s always room for more cheese, I know… – grate a few flakes of the cheese you’ve used for the patties as well onto the current stacks-of-yum.
5) Wedge the tomatoes into place with the bun-tops, hold on tight and…

By the way… I don’t know why, but there are never any vegetarians around when hubby, the acting Lord of Hellfire, mans the coals, skillfully “not cooking!” whatever I conjured up, prepped and brought out to the pit. Still, these are always a rousing success and questions along the lines of “why exactly did you make these anyways” are forgotten as soon as the burgers hit their mark. The usually very bloodthirsty pack of carnivores has spoken!

Speaking of bloodthirsty, if you’re planning a Burger Showdown, here are some of my other GW2-inspired Burger concoctions… for now~